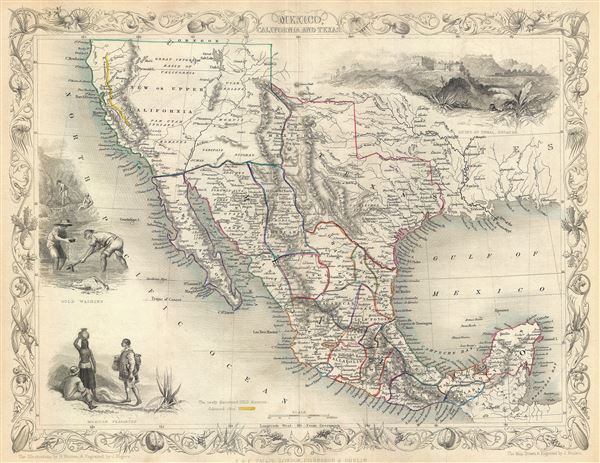 Uncommon map presenting Texas at its largest and highlighting the California Gold Region.

This is John Tallis's and J.H. Rapkin's highly desirable 1851 Map of Mexico, Texas and Upper California shortly after the Mexican American War and in the early days of the California Gold Rush. Texas is depicted at its fullest extent including both Santa Fe and the Green Mountains. Upper California offers numerous interesting elements, most specifically a colored and labeled Gold Region extending along the Sacramento River as far south as an oversized Lake Tule and Santa Cruz. The 'Great Caravan Route' followed by covered wagons during the Westward Expansion is also noted as it snakes its way across northern Texans and southern California to Los Angeles. The various Intendencia of Mexico are highlighted in outline color. The map also offers several beautiful vignettes by H. Warren and J. Rogers. These attempt to illustrate Mexican life, including Mayan ruins at Uxmal (Yucatan), gold panning in California, and 'Mexican Peasantry.'

Hinton, J. H., History and Topography of the United States of America, 1852.