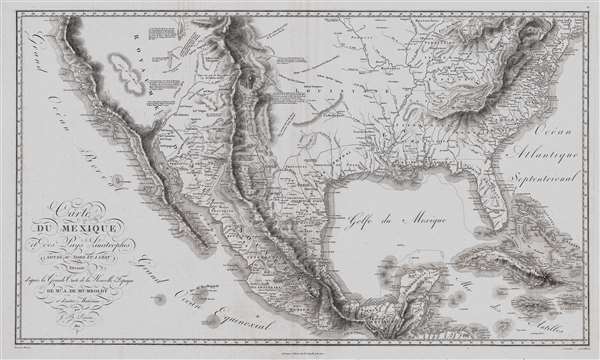 A seminal 1811 map of Mexico and the American West by Alexander von Humboldt. Humboldt, who during his lifetime was considered the 'world's greatest living man,' composed this map during his 1803 sojourn in Mexico. Though often playing second fiddle to Humboldt's more regional Carte Generale du Royaume de la Nouvelle Espagne, published in the same volume, this map is a cartographic achievement in its own right and, as Wheat notes 'An Important Map.' Covering from California to Connecticut and from the Great Salt Lake (here Timpanagos) to Honduras, this extraordinary map not only includes most of the important cartographic innovations introduced in Carte Generale du Royaume de la Nouvelle Espagne, it also frames this information in context with much of the territory that in the coming years would be subsumed into the expanding United States.

Humboldt spent part of 1803 and 1804 living in Mexico City as a guest of the Spanish Crown. As such he had access to rarely seen explorer's accounts and earlier mappings available in the Mexico City archives. These he combined with information from his own travels and explorations, as well as indigenous cartographic traditions and his own theoretical understanding of geography, to create this landmark mapping of the American southwest - the most sophisticated and advanced treatment of the region yet seen.

Among the significant advancements apparent on this map are Humboldt's connection of Fiedler and Mackenzie's 'Stoney Mountains,' today the Rocky Mountains, with the Cordilleras of Mexico. Humboldt also correctly maps the course of the Rio Gila as is passes north and west of 'Tubscon' (Tuscon). To the east of the Rocky Mountains, a burst of remarkable insight enables Humboldt to correctly unite the Nepeste and Arkansas Rivers. The Great Plains Humboldt curiously associates with 'Cibola,' one of the seven legendary cities of gold, but in actuality a former Hopi settlement in modern day New Mexico. Humboldt was a great fan in indigenous cartographic knowledge, which he incorporates here with regard to the Aztec migration 'myth' of Lake Teguayo - which he associates with Lake Timpanagos or Great Salt Lake. The is a common though likely erroneous connection which Humboldt was not the first to make. For the remainder of the map Humboldt draws on a number of sources including the Meria-Escalante expedition (west of the Rocky Mountains), accounts of the voyages of the ships Sutil, and Mexicana (Pacific Coast), the memoir of M. Espinsoa (Pacific Coast), the Lafond map (Louisiana), and the Arrowsmith map (United States). Humboldt's extraordinary cartographic work would remain the authorities document on this region until advanced by the expeditions of Fremont, himself an acknowledged Humboldtian, in the late 1840s.

For his efforts Humboldt was awarded with honorary Mexican citizenship, which he retained until his death at 87. However, had the Mexican officials who applauded Humboldt seen how his mappings would influence the future shape of their nation, they may have been less than pleased. In May of 1804, Humboldt sailed into Philadelphia. There he befriended Jefferson, Madison, Peale, and other post-colonial American luminaries. Believing in the free and open exchange of scientific data, Humboldt freely shared manuscript copies of his mappings of the American southwest. Shortly before the official 1811 publication of Humboldt's important maps, the priest Hildago shouted the historic 1810 Grito de la Independencia, beginning the Mexican War of Independence. The events that followed led directly to the Texas Revolution and the Mexican American War. Humboldt's masterful mappings of the region - of which this is one - gave the United States crucial intelligence that would eventually lead to the U.S. victory in the Mexican American War, influence the borderlines agreed upon by the treaty of Guadeloupe Hidalgo, and effect the adoption of the Doctrine of Manifest Destiny.

Drawn by Alexander von Humboldt and engraved by J. B. Poirson of Paris. Published in the 1811 French first edition of Humboldt's Atlas Geographique Et Physique Du Royaume De La Nouvelle-Espagne. A fine example of a exceedingly influential map, considered by Streeter to be an essential element in any serious southwest collection.

Rumsey 0328.004. Wheat, Mapping of the Transmississippi West … , 272-5. Streeter, Bibliography of Texas, part III, vol. I, no. 1042. Schwartz, I, 'Alexander von Humboldt's Visit to Washington and Philadelphia, His Friendship with Jefferson, and His Fascination with the United States', Northeastern Naturalist, vol. 8, special issue 1, pp. 43-56. Katherine R. Goodwin, “The World in Your Hands: Recent Cartographic Acquisitions,” The Compass Rose, vol. XIV, no. 1 (Spring 2000). Philips (Atlases) 2682.
Looking for a high-resolution scan of this?