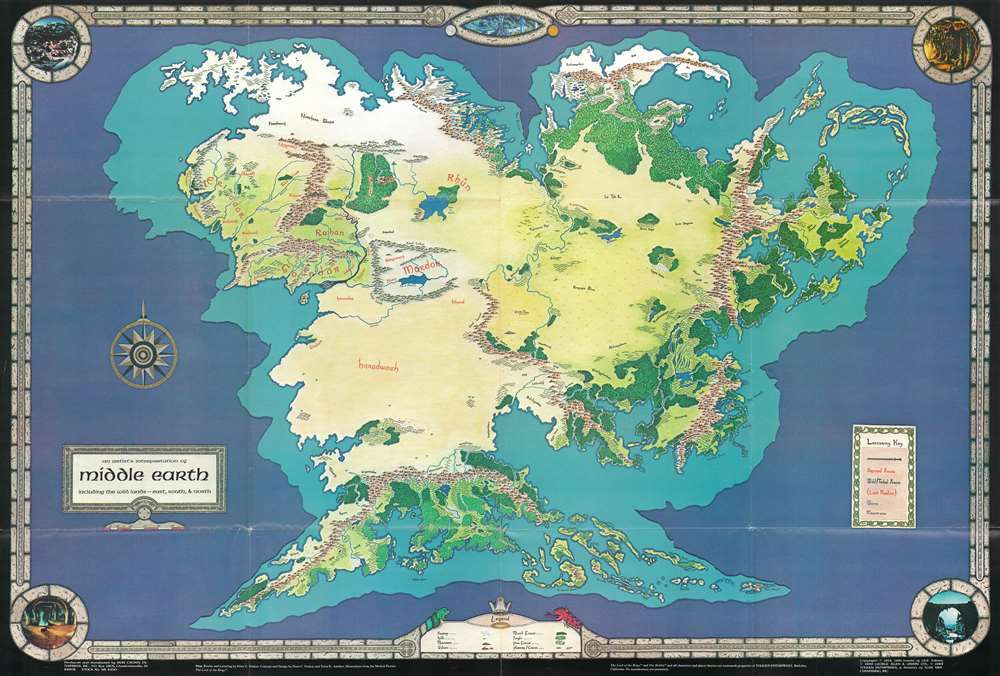 This is a 1982 map of J. R. R. Tolkien's fantasy world 'Middle-Earth' by Peter C. Fenlon. Fans of Tolkien will be quick to recognize the northeastern part of the map, generally known as the Westlands, encompassing the main theater of both the Hobbit and The Lord of the Rings. The cartography for these areas, from Forodwaith to Umbar and from the western ocean (Belegaer) to the Sea of Rhûn, is drawn directly from the iconic map that accompanied the The Lord of the Rings. Unlike the maps published in Tolkien's famous books, the present map extends south and west to embrace the entire continent of Endor. Cartographically, Endor roughly mirrors Europe (Westlands), Africa (Haradwraith), and Asia (east of Rhûn). Although Tolkien's Legendarium does in fact give some hints regarding the lands and topography to the east of Mordor and Rhûn, much of the cartography here seems to have been imagined by Fenlon. Nonetheless, this map proved popular in the 1980s and was distributed to complement Iron Crown Enterprises successful LOTR-based role-playing game series. Although the map has no scale, we extrapolated a scale of 1:19000000 based on Tolkien's statement that Mirkwood was 300 miles wide.

Pete Fenlon (1955 - present) is an American role-playing game designer, game developer, graphics designer and publisher. His works include stories, art and games (electronic and non) in the genres of science fiction, mystery, fantasy and historical fiction. For the purposes of maps, his best-known work is a large format map of the Tolkienian continent of Endor that extends well beyond the lands covered in The Lord of the Rings and other Tolkien literature. He is also responsible for the popular board and car game, The Settlers of Catan. Learn More...