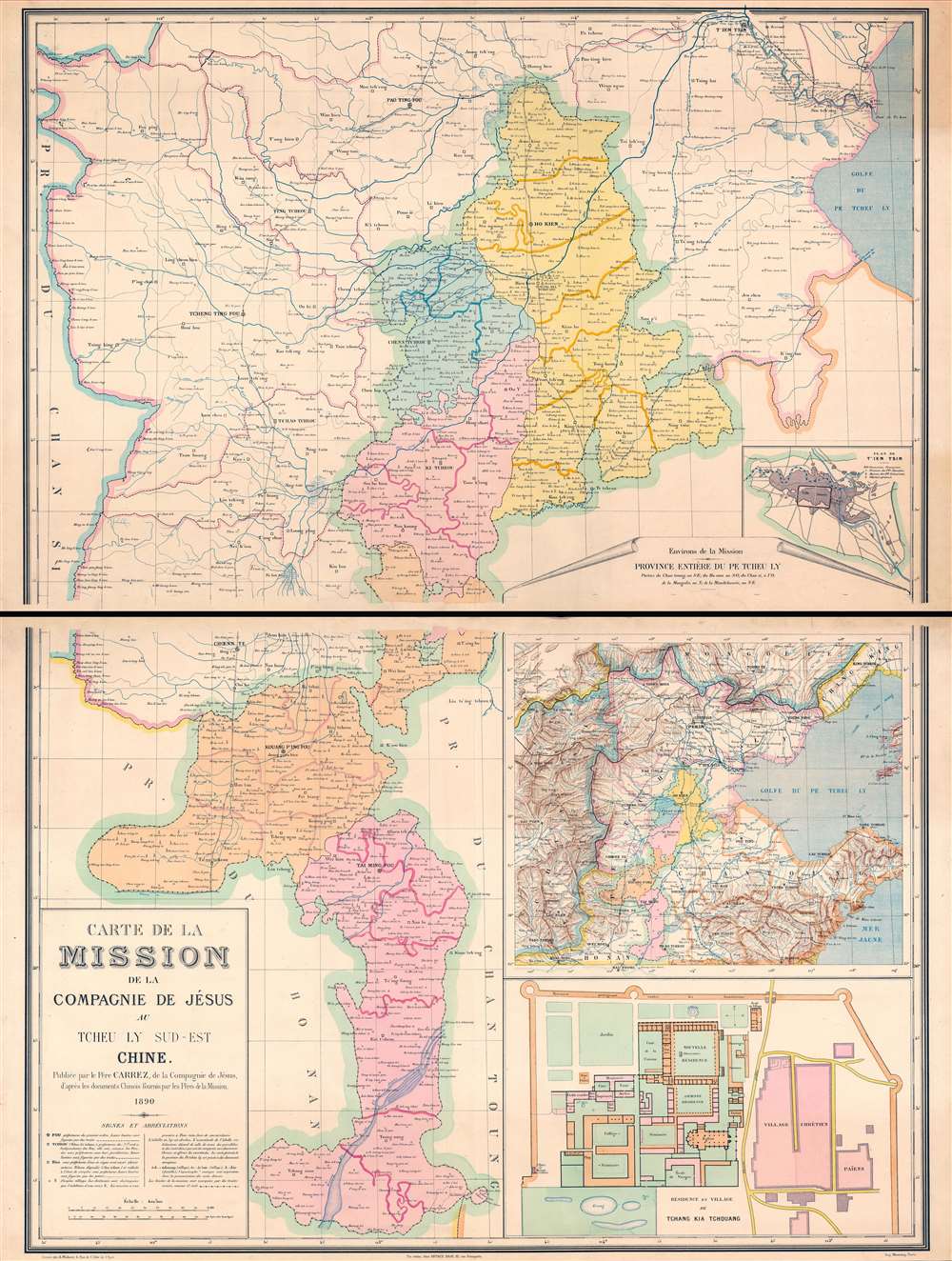 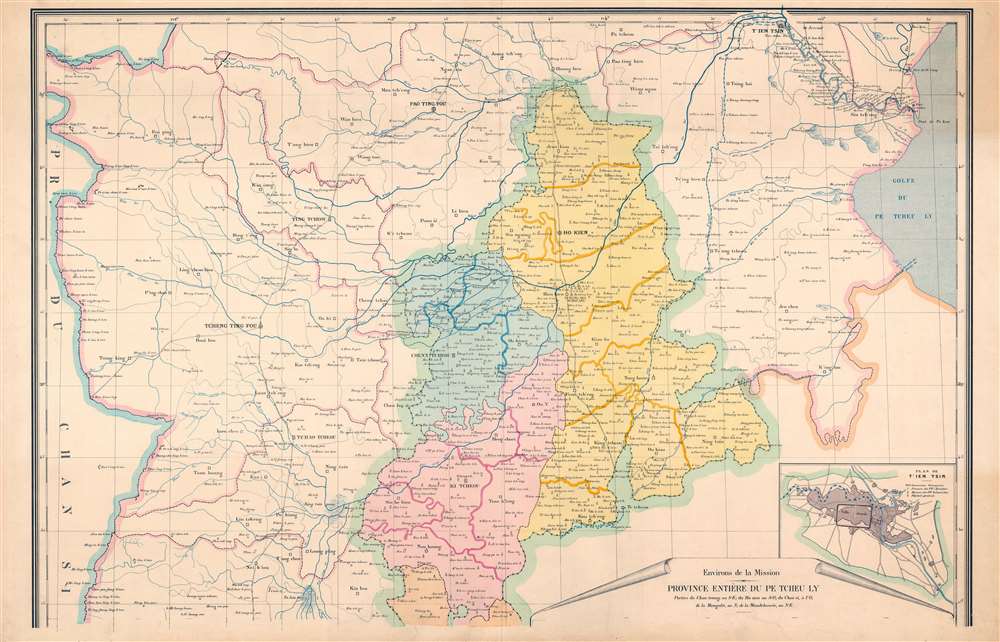 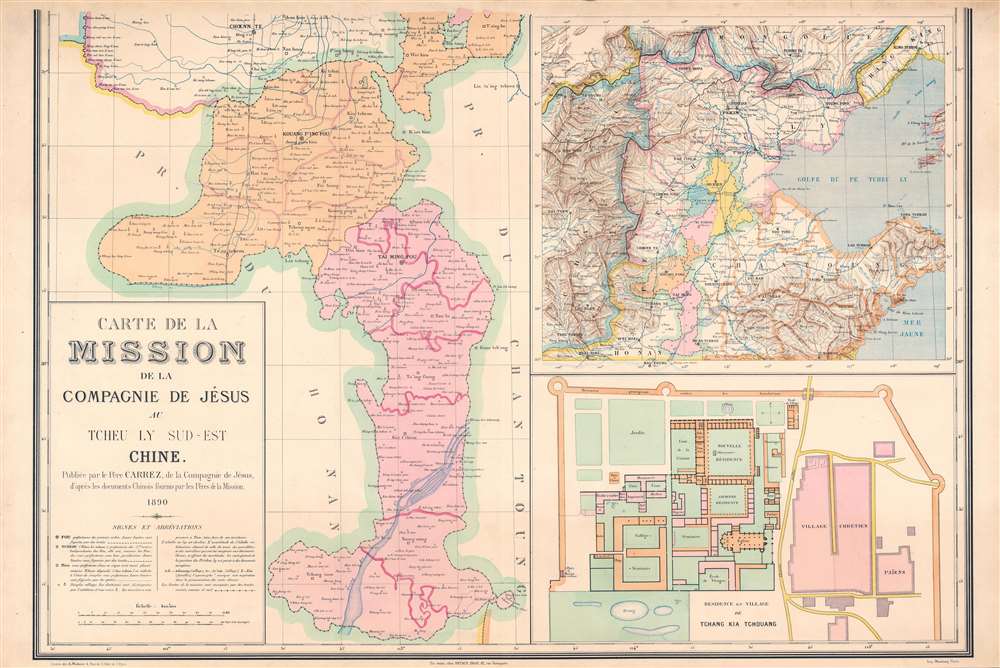 This is a rare 1890 Carrez map of western Shandong and southern Hebei, China, illustrating missionary activity in the region just a few years prior to the Boxer Rebellion (1899 - 1901). Coverage extends roughly from Tianjin (Tientsin), located in the upper right, south to roughly Zaozhuang. The map details the oddly shaped Apostolic Vicariate of Tché-Ly du Sud- East, occupying part of western Shandong and southern Hebei. The map is further subdivided into missionary districts, with coded icons representing the locations of churches and their status. In the lower right, there is a smaller map illustrating the general vicinity, and a large inset of the large fortified mission at Tchang Kia Tchouang (Chiang Kia-Chuang).

In the late 19th century, Tchang-kia-tchouang was a small Chinese village roughly corresponding to modern-day Shijiazhuang (石家庄市), in southwestern Hebei Province, North China. The Jesuits established a mission there sometime around 1856. They were initially very successful, but in the early 1860s the area was hit with an outbreak of cholera and a subsequent rebellion against the Qing and general brigandry. After suffering heavy losses, the Jesuits fortified the mission - as shown here. Under fortified conditions, the mission continued to grow, constructing an observatory in the 1870s, as well as an orphanage, residence, college, and armory. This map was issued at the highpoint of the mission's success, by which time it had converted tens of thousands. Around this time, violent unrest against missionary activity and foreigners in general also began fomenting. In 1897, several missionaries were killed by Chinese anti-foreign activists. Two years later the region around Tianjin became the nexus of the Boxer Rebellion or Yihetuan Movement (義和團運動). Since part of the Boxer unrest was a reaction to too-active European missionary activity, one can only leave scholars to ponder just how much of a role Tchang Kia Tchouang played? The Boxers extracted a heavy price from the mission, with four Jesuit priests and more than 5,000 Chinese converts massacred. The martyred priests were Léon-Ignace Mangin, Modeste Andlauer, Rémy Isoré, and Paul Denn.

This map was drawn by Louis Carrez, engraved by Frédéric Louis Charles Wuhrer, and printed in Paris by Jean Noël Monrocq. It was published in 1890 on behalf of the Jesuit order. A seller's imprint, Chez Retaux Bray, suggests that it was offered commercially, despite it being rare today. There is only one other known example, that being located at the Bibliothèque nationale de France.

Louis Carrez (1833 - 1920) was a French Jesuit priest, geographer, and historian. He served as a priest in the province of Champagne, where he taught at the Saint Clément college in Metz, until it was closed in 1872. Carrez published several Jesuit atlases and maps and has been criticized for 'treating the Society of Jesus almost like a geographical organization.' IN the 1890s he settle in Châlons-en-Champagne where he focused the remainder of his career are local ecclesiastical history. Learn More...


Frédéric Louis Charles Wuhrer (1844 - 1925) was a French cartographer, engraver, and artist. He lived in the town of Buc, France, where he purchased the former Town Hall. Wuhrer is better known as a landscape artist, with a strong record at auctions. Little is known of his engraving work, but the Bibliothèque nationale de France has over one hundred pieces in their collection attributed to his name. Learn More...


Jean Noël Monrocq (December 25, 1819 - February 18, 1913) was a French printer and bookseller active in Paris in the mid to late 19th century. Monrocq was born on Chrismtas day, hence his name, in Trelly, La Manche, the son of a farmer. In 1839 he moved to Paris for a more urban lifestyle. Although he had little formal education, he found work with the Parisian book and print seller Delarue. Meating some success, he opened his own print shop in 1848. He initially applied for a booksellers patent in 1853, but the application was initially rejected. It was formally approved in 1877. In 1859, he received a lithographers patent for artistic and industrial prints for education purposes. He took over the presses of Louis Etienne Stanislas Petit in 1859, but did not relieve a formal intaglio imprint until 1865. In March 1874, he established a branch of his lithographic printing press in Ivry, Rue de Vitry, where he moved part of his equipment. He became known for zincographic lithography - the process of etching plates into zinc, which he claimed falsely to have invented. He did nonetheless, contributed significantly to the industrialization of the printing with zinc plates. Being cheap, simple to make, easy to modify, zinc plates became the standard for news printing. Zincography under Monrocq was also ideally suited to map production. The Monrocq produced a significant corpus of maps. The firm spearheaded the movement to centralize map production in France. The firm continued well after his death, issuing maps for both Hachette Taride. For a long time, his son, Léon Monrocq (1857 - 1902) worked with him specifically printing maps, unfortunately he died young. The firm for a time was operated by the founder's son-in-law, who took the name Gaillac-Monrocq. Jean Noël Monrocq's grandson Lucien Monrocq, eventually took over the publishing arm of the firm. Learn More...

Very good. One map on two unjoined sheets. Exhibits some toning. Blank on verso. Could be joined as a large wall map for an additional fee. Individual sheets measure 37.5 x 24.25 inches.