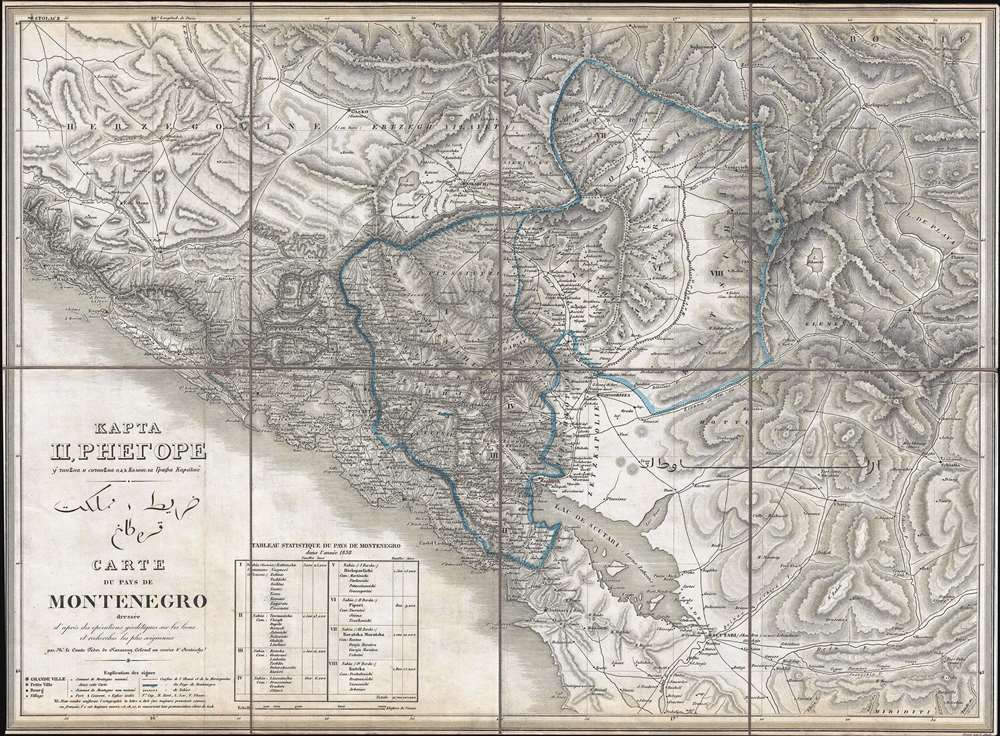 One of the most important 19th century maps of the Balkans and the first accurate survey of the interior of Montenegro.
$2,800.00

This is an 1838 Count Fedor von Karacsay map of Montenegro. One of the most important 19th century maps of the Balkans and the first broadly accurate map of Montenegro, the map depicts the region from Ragusa (Dubrovnik) to Scutari (Shkoder) and is centered on the Prince-Bishopric of Montenegro.

A Short History of the Map

Although Montenegro was then an autonomous region of the Ottoman Empire, its actions more closely resembled those of an independent nation. Occupying a much smaller area than modern Montenegro, the adjacent coastlines of Dalmatia were under Austrian control, while Bosnia, Herzegovina, and Albania were under direct control by the Ottomans. Even though relations between Montenegro and Austria were tense at best, Karacsay, then the Austrian military commander of Cattaro (Kotor), and the Montenegrin vladika Petar II Petrović-Njegoš became close friends, and Petrović-Njegoš allowed Karacsay to undertake the surveys that served as the basis of this map.

An incredible work, the map highlights the area's topography in detail and labels cities, towns, and villages throughout. Roads, rivers, and lakes are also presented in detail. A key, situated in the lower left corner, explains the various notation used, including those to identify forts, convents, and churches. A table of population statistics, the Tableau Statistique du Pays de Montenegro is included next to the key, and informs the viewer how many families and individuals reside in Montenegro's eight districts. Most of the map is printed in French (then the premier Pan-European intellectual language), the title is also written in Serbo-Montenegrin and Ottoman Turkish.

This map was created by Count Fedor von Karacsay, engraved by Pietro Allodi and published in late 1838. The present example is the first edition and a second edition was published in Vienna by Artaria and Company in 1854. This is a rare find, as we have been unable to locate another example to appear on the market in recent history. We have located six examples of the first edition in collections at the U.K. National Archives, Biblioteca Teresiana (Mantova), Charles University (Prague), Muzeum Brněnska (Brno), Bayerische Staatsbibliothek (Munich), and the University of Illinois at Urbana-Champaign.

Fedor von Karacsay (1787 - 1859) was a Hungarian cartographer, artist, and adventurer. A member of a Hungarian noble family, little is known about his childhood, though records show that he was a graduate of the Theresianum, a prestigious Austrian military academy in Wiener Neustadt. He as a cadet in the Austrian army by 1805 and held the rank of lieutenant while serving at the 1813 Battle of Dresden, a major engagement during the Napoleonic Wars. Early in his military career, Karacsay received formal training in military engineering and advanced survey methods. A remarkable soldier who had distinguished himself due to his ability and drive, he had been promoted to the rank of colonel by the 1830s and was given the highly important post of garrison commander of Cattaro (Kotor). Located on the Bay of Kotor not far from the Dalmatian coast, the city was a flashpoint in the region, since it was an Austrian-controlled port city with a majority Slavic population. Montenegro openly coveted the city, and, while open warfare never broke out between the Montenegrins and the Austrians, relations were always tense at best. Karacsay, however, had a kind and genial demeanor that endeared him to the locals, as did the reality of his time as garrison commander, which was gentler and more culturally sensitive than that of his predecessors. Despite the tension and near hostility between the two nations, Karacsay was invited to visit the court of the Montenegrin vladika Petar II Petrović-Njegoš in Cetinje in 1836. The two became fast friends and formed a lasting friendship that transcended national rivalries. It was because of this relationship that Karacsay was able to complete and publish the first scientific survey of the interior of Montenegro. After his tour of duty in Kotor ended, Karacsay was posted throughout the world, including as the head of the Habsburg mission in Belgrade and as special envoy to Sultan Abdülmecid I in Constantinople. Due to this intellect and capacity for writing, Karacsay published several travel books about his journeys. By the early 1850s, Karacsay was posted in Brno, and later Budapest, where he developed a fascination for Pan-Turanism, the idea that Hungarians share a common ancestry with the Turkic peoples as well as other Asiatic ethnic groups. In his desire to find these links between Hungarian and Asian cultures, he traveled to Herat, Balkh, Bohara, and Samarkand. Karacsay died in Tehran in 1859 holding the rank of General. Learn More...

Very good. Dissected and mounted on original linen in 8 panels. Even overall toning. Accompanied by original slipcase.
Looking for a high-resolution scan of this?