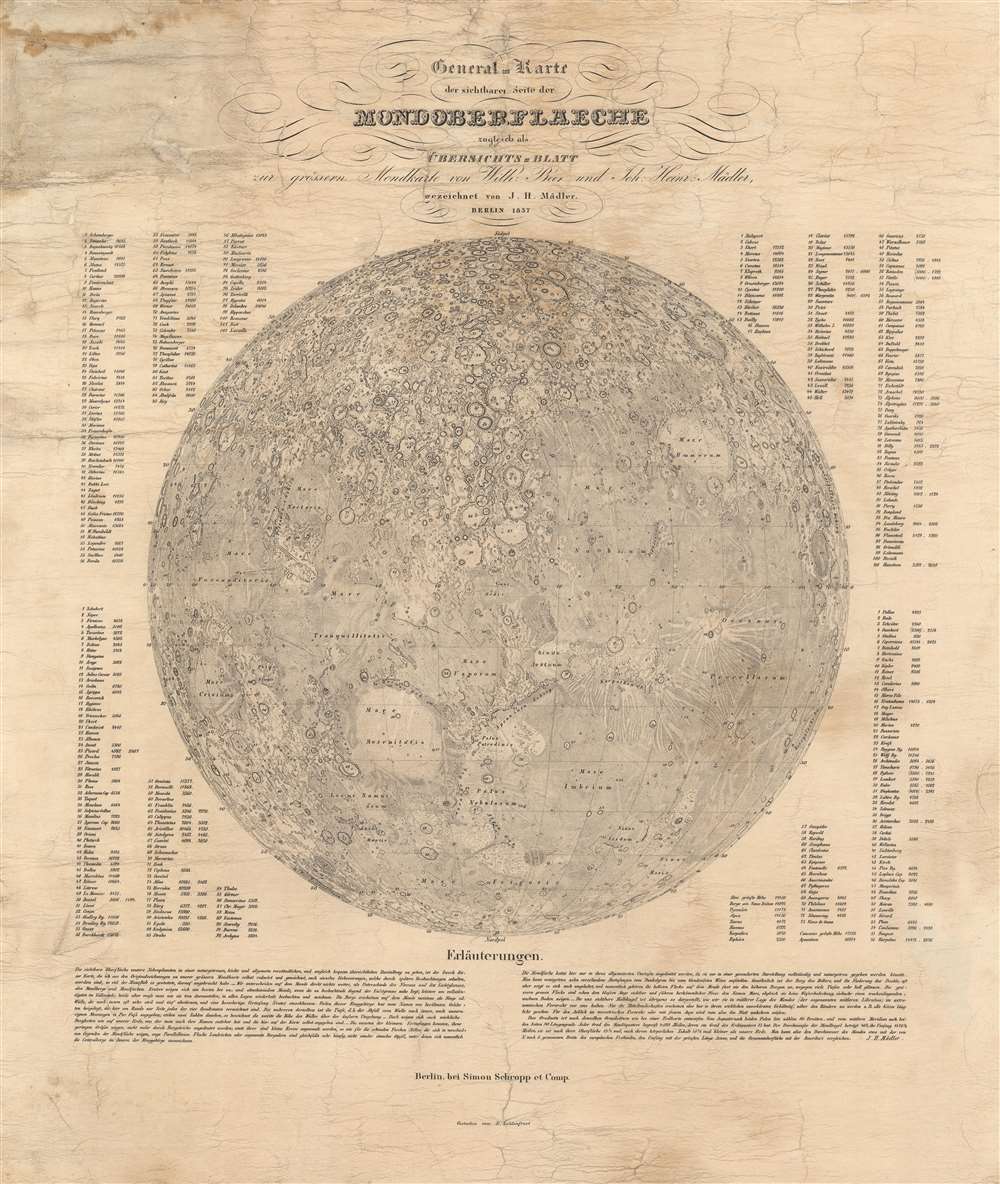 A groundbreaking lunar map of considerable rarity and great significance. Sharply detailed, separately-issued map of the moon, produced in 1837 by the German astronomer Johann Heinrich Mädler. It is a reduced version of his 1834-6 four-sheet map of the moon, and represents just the second accurate, printed map of the lunar surface visible from Earth. It is abundantly detailed, naming 351 individual mountains and craters and using a number key to mark their locations on the map. The tables are broken into quarters, corresponding to the four parts of the original map. Where Mädler has been able to calculate them, the tables also provide the height and depth of the noted features.

Mädler and his patron, Wilhelm Beer, had produced the first accurate map of the moon, Mappa Selenographica. In 1837, Mädler and Beer produced a book, Der Mond nach seinen kosmischen und individuellen Verhältnissen, presenting the results of their lunar studies. The book contained five wood-engraved plates, but no general map. The present map appears to have been published separately as a supplement to the book, though we see no example of the book in institutional collections accompanied with the map. We know of no other states or editions of this particular map.

Johann Heinrich von Mädler (May 29, 1794- March 14, 1874) was a German astronomer. Along with his patron, Wilhelm Beer, he produced the first true maps of the planet Mars, and established the Sinus Meridiani as the prime meridian for Martian maps. They also came within 1.1 seconds of determining Mars' rotation period. They also produced the first accurate map of the Moon, Mappa Selenographica, published in four volumes between 1834 and 1836. In 1837 a description of the Moon (Der Mond) was published. Both were the best descriptions of the Moon for many decades, not superseded until the map of Johann Friedrich Julius Schmidt in the 1870s. In 1836 Mädler was made an observer at the Berlin Observatory, and hev was appointed director of the Dorpat (Tartu) Observatory in Estonia in 1840. He remained in there until his retirement in 1865, and then returned to Germany. He published many scientific works, among them a two-volume History of Descriptive Astronomy in 1873. Learn More...

Good. Mounted on linen. areas of restoration with some loss of text.