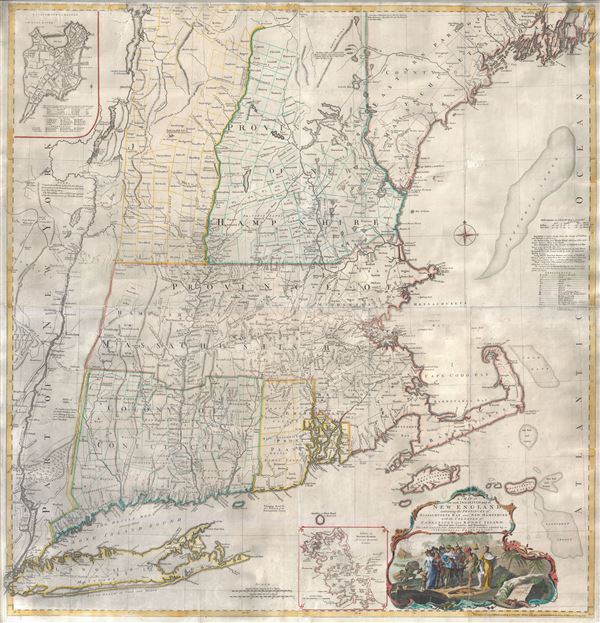 Braddock Mead (c. 1688 - 1757), also known as John Green, was an Irish cartographer and map engraver active in London during the middle part of the 18th century. Mead is one of the most interesting and colorful figures in cartography who's left handed personal life sharply contrasted with the high standard of his maps. Mead was born in Ireland around 1688 and seems to have come from a good family and received a respectable education. His brother Thomas Mead held the position of Lord Mayor of Dublin in 1757. Braddock Mead left Dublin for London around 1717 where seems to have been draw to vice, subsidizing his cartographic work with various "hack jobs" and gambling. In 1728 Mead fell in with a plot to defraud a 12 year old Irish heiress, Bridget Reading, of her fortune by kidnapping and marrying her himself. Mead suffered jail time for the crime but was more fortunate than his partner, a fellow Irishman named Kimberly, who was hanged. As a cartographer Mead cannot have exhibited a more antithetical character. He held himself and others to the highest standards of accuracy and scholarship, and issued a call for greater transparency in the field of mapmaking. Mead worked with Ephraim Chambers on the Universal Dictionary, as well as with Cave and Astley in the publication of various travelogues and explorer's journals. Eventually he came to work for the publishing house of Thomas Jefferys, who saw through Mead's personal failings to appreciate his cartographic brilliance. Mead has been called the genius behind Jefferys and he seems to have had a hand in the production of many of Jefferys' most important maps. William Cumming notes that Mead


Thomas Jefferys (1695 - November 20, 1771) was one of the most prominent and prolific map publishers and engravers of his day. Jefferys was born in Birmingham and was apprenticed to the engraver Emmanuel Bowen in 1735. Later, in the 1740s he engraved several maps for the popular periodical Gentleman's Magazine. Around 1740 Jefferys was finally able to go into business for himself and in 1746 received an appointment as 'Geographer to Fredrick, Prince of Wales,' which shortly after translated to the position of 'Royal Cartographer to King George III.' Jefferys initially specialized in compiling and re-engraving the works of earlier cartographers into more coherent cartographic wholes. Later, while not salaried position, Jefferys' appointment as 'Royal Cartographer' guaranteed preferential access to the most up to date cartographic material available, allowing him to produce new and updated charts of exceptional accuracy. He his best known for his maps of the Americas, particularly the posthumously published 1775 American Atlas, which included some of the finest and most important late colonial era maps of America ever made. Despite his prolific publishing history, royal appointments, and international publishing fame, Jefferys lived most of his life in dire economic straits. He was bailed out of bankruptcy by Robert Sayer during the production of the American Atlas. In the end, Jefferys died suddenly with very little to his name. Nonetheless, his cartographic legacy survived, and even after his death in 1771, many of his important maps continued to be published and republished by Sayer and Bennet, Conrad Lotter, Georges Louis Le Rouge, Laurie and Whittle, and others. Many attribute some of Jefferys best maps to the colorful and criminally inclined Irish cartographic genius Braddock Mead (John Green, c. 1688 - 1757), who is considered the 'secret behind Jefferys.' Jefferys was succeeded by his son, also Thomas, who had little success as a cartographer and eventually partnered with, then sold his stock and plates to William Faden - Jefferys' true heir.