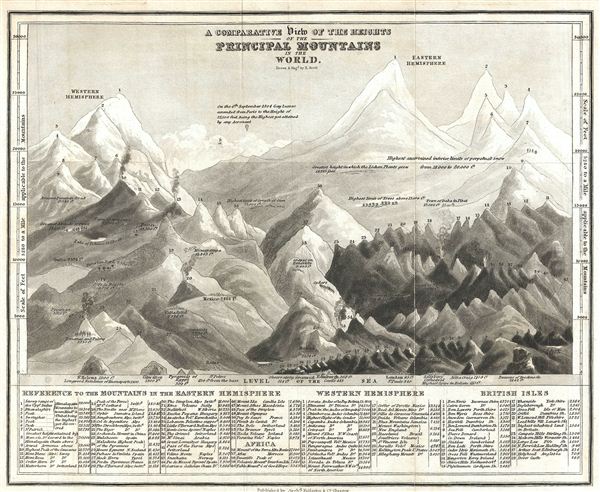 This is an extremely interesting takes on the comparative heights of mountains cartographic sub-genre, as it adds human achievement and buildings to the scale. Comparative mountains charts first appeared in the late 18th and early 19th century. Initially these charts focused on europe or even signal countries, but by the early 19th century the explorations of the world's great peaks had reached a point where such a chart could be composed on a global level. Covering both the eastern and western hemispheres, this chart shows not only the heights of mountains, but also compares them to important buildings, cities, and heights reached by climbing expeditions. The mountains are grouped into eastern and Western Hemisphere, Africa and British Isles. Nearer to sea level are important buildings and cities, including the pyramids, Gibraltar, the observatory at Greenwich, London, Salisbury Cathedral, among others. Published by Archibald Fullarton & Co. of Glasgow, Scotland.

Archibald Fullerton (fl. c. 1809 - 1868) was a Scottish engraver and map publisher active in the first half of the 19th century. Fullerton first began publishing maps in partnership with his friends William Somerville and John Blackie (1782 - 1874), with whom, on November 20 of 1809, he established the Edinburgh Blackie, Fullerton and Co. Around 1831 Fullerton left Blackie, Fullerton, and Company to found his own, independent firm, Fullerton and Co., in Glasgow. Fullerton and Company, which prospered between 1831 and 1850, specialized in Gazetteers and popular regional and world atlases. Fullerton's maps, most of which were copper plate engraving, are considered among the most decorative British maps of his era and included numerous vignettes and other attractive elements. Learn More...