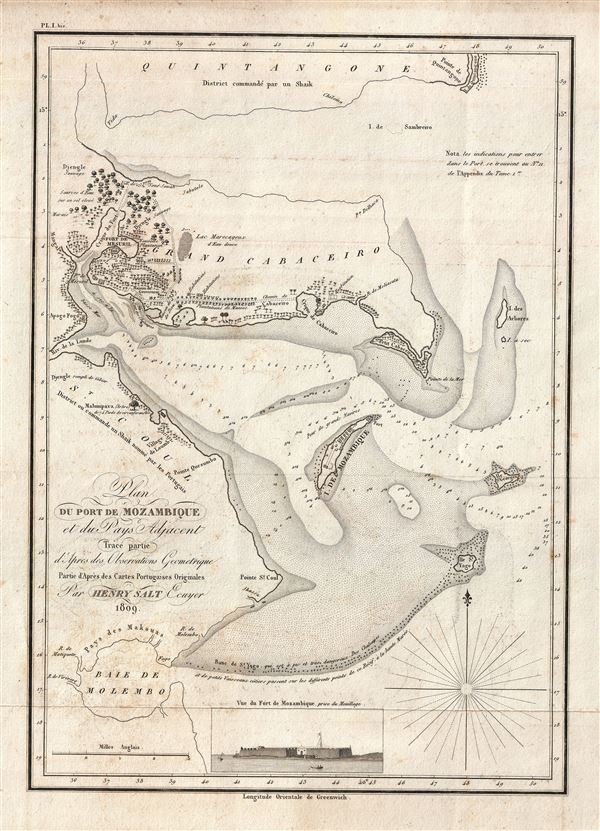 A scarce and important 1809 Henry Salt nautical chart or maritime map of the port and island of Mozambique, Nampula Province, Mozambique, Africa. The map covers the Harbor of Mazambique, the city of Mossuril, and the Island of Mozambique, as well as some of the souring waters and shoals. Henry Salt, while on a diplomatic mission to Eritrea, arrived in Mozambique on August 25 of 1809 and remainder there until the 16th of September. At the time Mozambique was a Portuguese port and hub of the eastern slave trade - which Salt, like most British of this period, deplored. The map highlights those area actually visited by Salt, including the Island of Mozambique, the city of Mossuril (Messuril), where the Portuguese governor maintained a mansion, and the southern coast of the Grand Cabaceiro. Other regions not actually visited, Salt merely ghosted in. Much of this map Salt no doubt copied from material provided for him by the Portuguese governor, who, he notes, 'has given me every information relative to the coast.' Nonetheless, Salt was known to be a careful observer, and while not a navigator himself, kept a careful nautical journal. There is no doubt there many of the observations, soundings, and other details presented here are taken directly from Salt's own notes and are therefore comprise new unique information about the region. This map was prepared to illustrate the 1816 French edition of Salt's Voyage to Abyssinia.