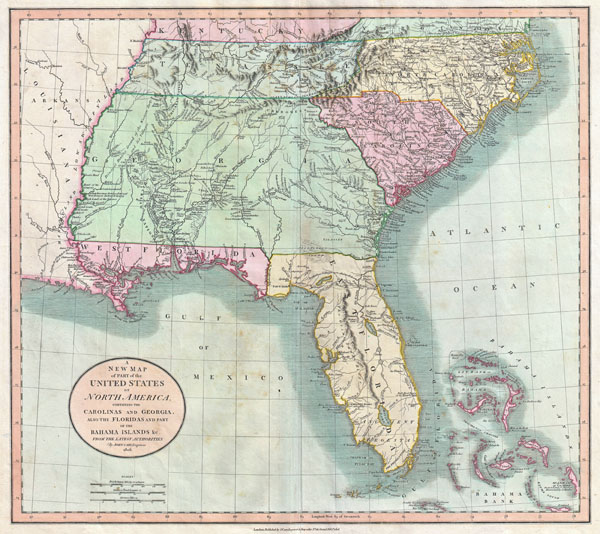 Published by John Cary in 1805, this is one of the most interesting and attractive maps of the American southeast to appear in the first years of the 19th century. Covers from Kentucky and Virginia South include all of modern day North Carolina, South Carolina, Tennessee, Georgia, Alabama, Mississippi and Florida. Georgia is shown extending westward as far as the Mississippi River despite the creation of the Mississippi Territory in 1798. Florida is divided at the Appalachicola River into eastern and western sections. West Florida, ostensibly part of the Louisiana Purchase, was claimed by the Spanish and remained under their control until 1812. Southern Florida is labeled 'Ancient Tegesta' according to the 18th century convention. Tegesta is a name of somewhat mysterious origins that appears on maps of Florida as early as the 1600s. It most likely refers to a vanished American Indian tribe or abandoned village located near what is today Miami. Offers copious notations and comments throughout, most of which are extremely interesting. Identifies the locations of numerous American Indian nations including the Creeks, the Chicksaw Nation, the Cherokees and others. Notes the abandoned Applachee Villages in northern Florida. Also offers notes on American Indian hunting grounds, springs, river navigation, roads, swamps, forts and the sites of important battles. All-in-all a wonderful example of a rare and important map of the American southeast. Prepared in 1806 by John Cary for issue in his magnificent 1808 New Universal Atlas.

Very good condition. Minor discoloration in Gulf of Mexico and near 'Akenfonogo Swamp', else clean. Original centerfold. Blank on veso.