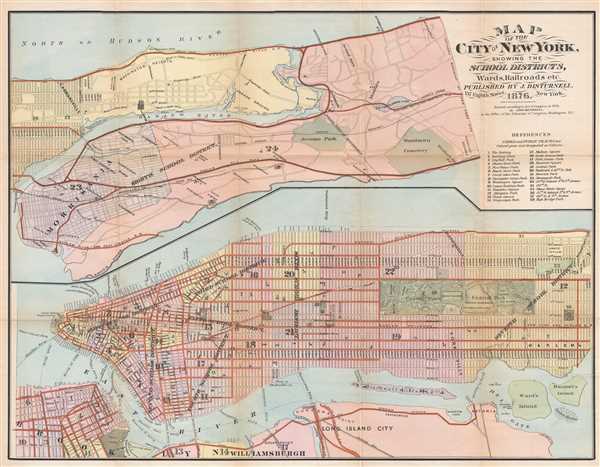 This is an 1876 John Disturnell city map or plan of New York City. The map depicts the city in two halves: the portion of Manhattan island above 130th Street and the Bronx north to Woodlawn Heights is illustrated on the top half of the sheet, while Manhattan below 129th Street to the Battery and portions of Brooklyn, Williamsburg, and Long Island City are illustrated on the bottom half. Highly detailed, city wards in both New York City and Brooklyn are labeled, along with each of the eight school districts in New York City. The school districts to not appear to be as defined as the city wards, making it more difficult to determine exactly what parts of New York City constituted which school district. Ferry routes across the East River are illustrated and labeled, while ferries across the Hudson are simply labeled. Streets throughout New York City and Brooklyn are labeled, along with Central Park in Manhattan and the Navy Yard in Brooklyn. At this point in New York City's history, the five boroughs had not been consolidated yet, so New York and Brooklyn were still two separate cities.

This map was published by John Disturnell in 1876.

Haskell, D., Manhattan Maps: A Co-operative List, 1296.
Looking for a high-resolution scan of this?