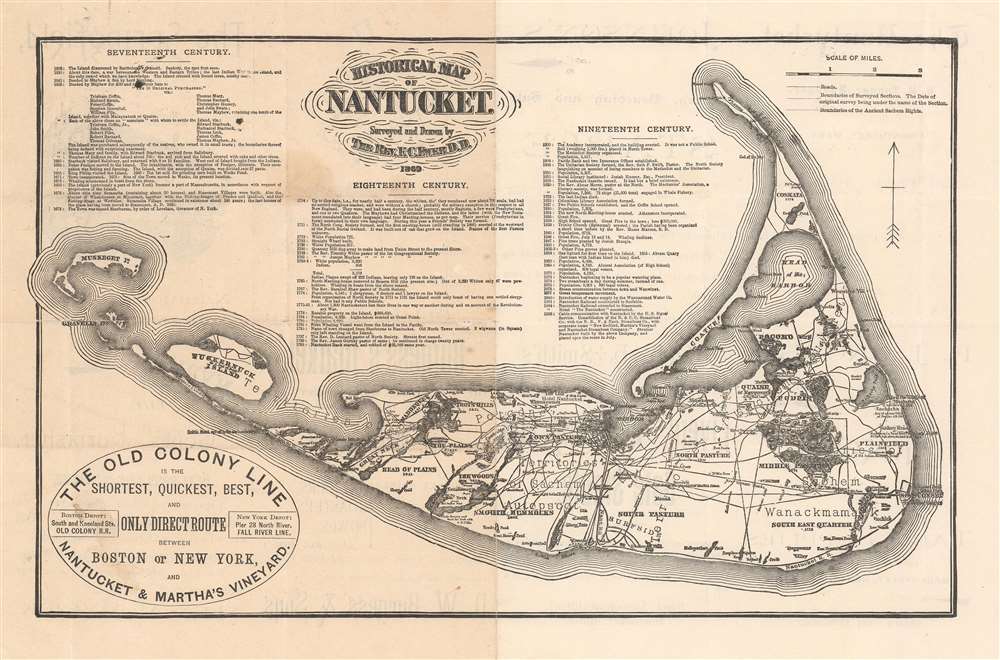 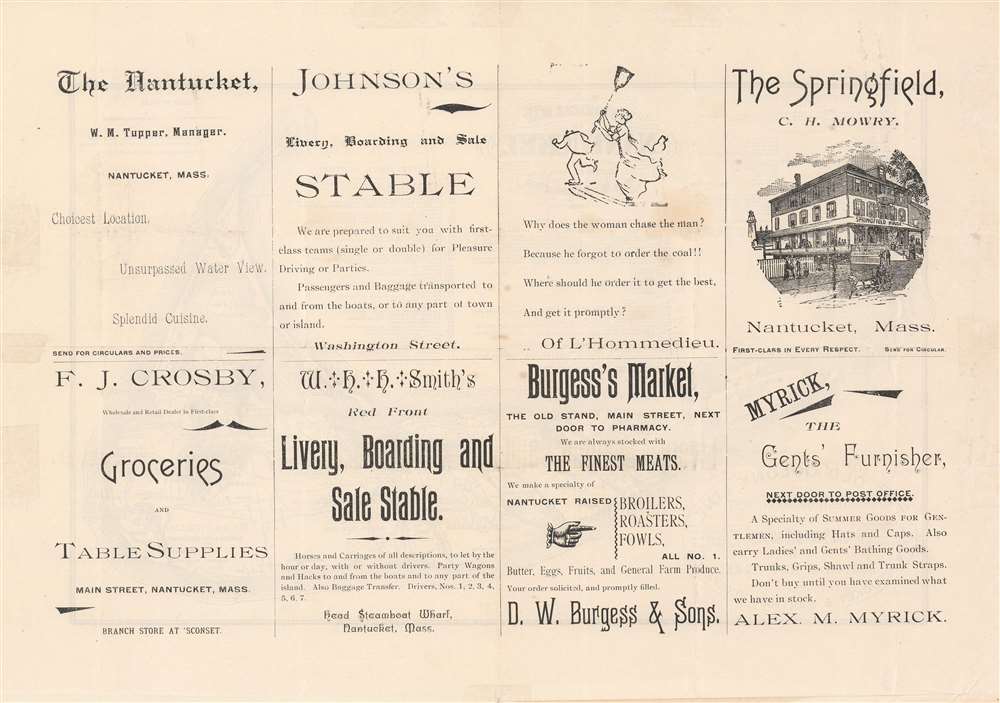 This attractive c. 1886 map is a reduced version of Reverend F. C. Ewers important 1869 map of Nantucket. Printed in Nantucket, this variant was issued by the Old Colony Line in various formats from roughly 1872 to 1889. A medallion in the lower-left promotes the 'Old Colony Line' as the 'Shortest, Quickest, Best, and Only Direct Route between Boston or New York and Nantucket and Martha's Vineyard.' Features three columns of text breaking down the history of Nantucket from its discovery by Bartholomew Gosnold in 1602 to the laying of the first communications cables between Nantucket and the mainland in 1886 - hence our dating.

The present map follows the updates and modifications to the Ewer plan introduced by J. B. Swain in or around 1886. Swain's revisions of the large-scale original were intended for a reissue promoting the Hotel Nantucket, shown here on Brant Point. The hotel was a response to growing 'summering' interest around Nantucket and was the first major hotel on the island. We know Swain was a Nantucket hotelier in his final years, so his association with the Hotel Nantucket, while not fully verified, is almost certain. We also know that the hotel was built on 'Society of Friends' land, and that Swain was closely associated with the 'Friends' in Nantucket. In any case, Swain massively revised the Ewer ma. He further updated it to reflect recent changes on the island, including the construction of the Hotel Nantucket, the Nantucket Railroad from the harbor to Surfside and on to Siasconset, and life-saving stations at Coskata and Muskeget Island. He also notes, in 1877, the 'Great Temperance Movement.' The table of historical events has been updated to 1886 and reflects these and other developments.

This map has a complex, confusing, and little researched publication history. It was originally drawn and published by Ferdinand Cartwright Ewer in 1869. That edition was large, measuring more than 40 inches wide. It was reissued around 1886 for the opening of the Nantucket Hotel. Around the same time, a reduced version emerged to promote the Old Colony Line, with a large medallion to this effect in the lower right. This edition is the most common and was republished in many variations. The timeline on most such examples terminated in 1886. Examples were published in books, such as Nantucket in a Nutshell, as well as in separate issue pamphlets, as here, passed out at the Nantucket Hotel and other tourist 'hot spots.' These scarcer more ephemeral issued, often with advertising on the verso, as here, are particularly desirable. Examples are scarce and typically in poor condition.