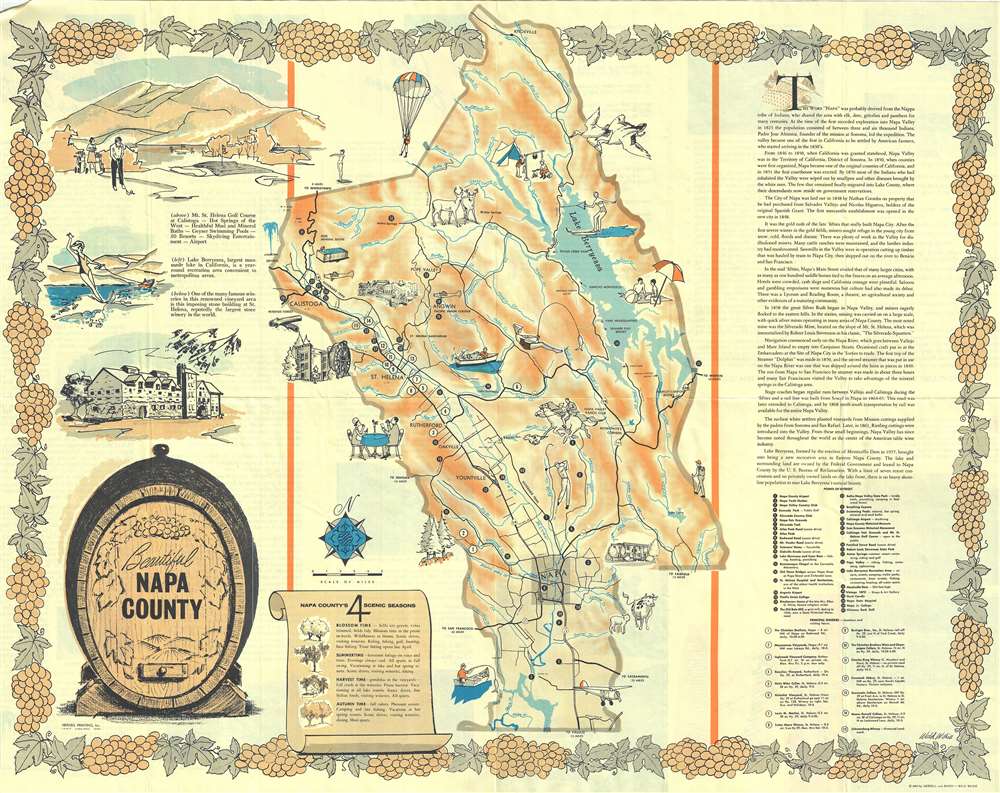 This is a beautiful 1963 pictorial map of Napa County by Weld Wilkie. It covers Napa County, one of the world's premier wine regions in beautiful detail, noting several landmarks and places of interest including The Old Bale Mill, Breathing Ceysers, Robert Louis Stevenson State Park and several others, with a location key in the lower right quadrant. Fifteen principal wineries including Charles Krug Winery, Beringer Bros. Inc., Inglenook Vineyard Company, Schramsberg Winery and others are also marked with a key in the lower right quadrant. The map is adorned with several illustrations throughout, depicting activities like dining, fishing, horse riding, trekking, camping, golfing water sports, as well as illustrations of animals, trees and other landmarks. Roads, rivers, lakes, towns and other topographical features are also noted.

This is considered a 'pictorial map' or a 'decorative map,' and reflects a style that first began to appear around 1910. As a map its intention is not so much to provide direction as to illustrate the character, famous places, and historical appeal of Napa County. Cartographically speaking, this map style most likely draws its inspiration from late 19th century 'tourist maps' and 'railroad maps.' Tourist Maps, common to major cities in Europe (usually Paris or London), included profiles of notable buildings and monuments and were designed to help foreign tourists identify and navigate to the most important sights. 'Railroad Maps' are a related genre more common to the United States. During the latter part of the 19th century railroad boom, railroad companies began issuing decorative route maps extolling the virtues various regions and their accessibility by rail. Standing somewhere between this two map styles, our map combines the decorative aspects of both while reducing cartographic value. It may be hard to get from A to B using this map, but its attractive design and decorative flourishes, make it an excellent souvenir and memento of a wonderful Napa County vacation.