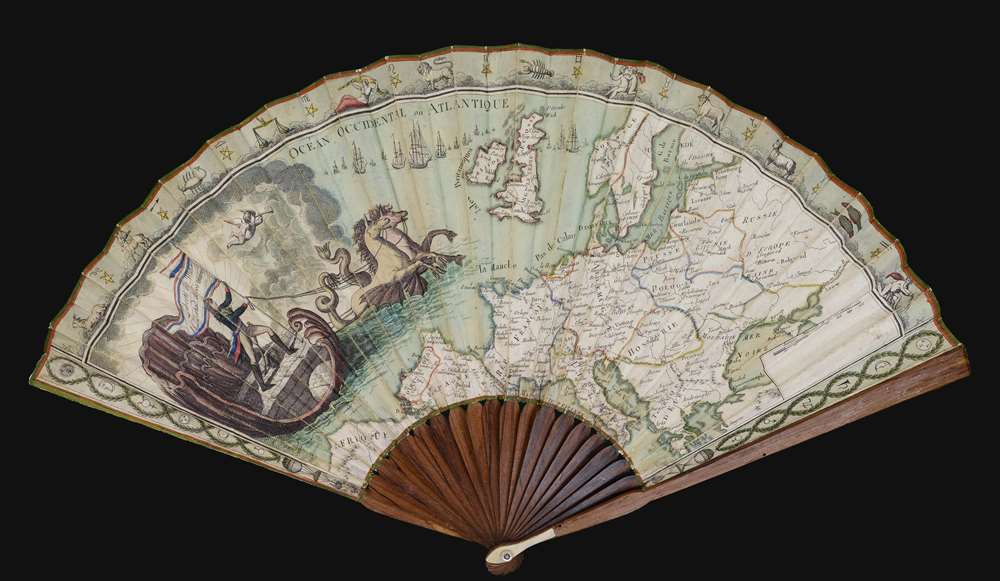 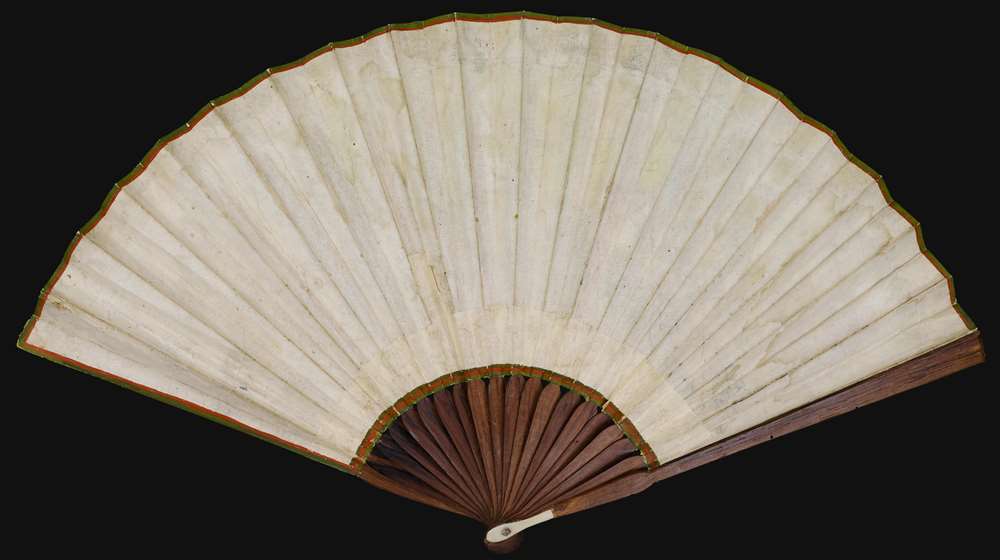 A striking c. 1799 - 1801 fan-map of Europe illustrating Napoleon riding a clamshell chariot brandishing a 'Liberté des Mers' or 'Freedom of the Seas' banner. The banner is written in both French and Spanish. France and Spain where allies in the War of the Second Coalition, and Napoleon was keen to propagandize his message of maritime freedom throughout Spain, whose declining navy was the only force that might stand against British maritime power.

Freedom of the Seas

During the War of the Second Coalition (1798 - 1802), Napoleon leveraged his political clout to argue that the seas were neutral territory that any nation could fish, trade, and travel upon without fear of repercussions from any other nation. The argument is one historically made by a powerful terrestrial power in the face of a powerful naval power. In this case, France had, in effect, no navy with which to defend French maritime interests against the British. During World War I, Germany, in a similar situation, made similar claims.

This map was likely issued shortly after Napoleon's return to France following his disastrous naval defeat at the Battle of Aboukir Bay (1798), in which British Rear-Admiral Sir Horatio Nelson decisively destroyed the French Republic Expeditionary Fleet, effectively putting an end to French Naval Power in the Napoleonic Era. In response, from about 1800, Napoleon and his foreign minister Charles Maurice de Talleyrand, devised a stratagem arguing that England violated international law when it insisted on the right to search all vessels it encountered at sea. Napoleon hoped such arguments would motivate neutral forces, including the United States, Sweden, and Russia (who withdrew from the Second Coalition in 1799), to support France against England.

Later, when Napoleon declared himself Emperor of France, he called on his alliances to boycott British trade - contrary to his earlier 'Liberté des Mer' message.

War of the Second Coalition

The War of the Second Coalition (1798 - 1802) was fought against Revolutionary Era France by a coalition of European monarchies led by Britain, Austria, and Russia, with support from the Ottoman Empire, Portugal, Naples, and several German monarchies. Spain supported the French Republic. The goal of the hostilities was to contain the expansionist French Republic and restore the Bourbon Monarchy. French Republic forces, led by the brilliant general Napoleon Bonaparte, largely outmaneuvered Second Coalition forces and, despite devastating naval losses in Egypt, defended most of its European conquests. Britain and France signed the Treaty of Amiens in March 1802, bringing an interval of peace to Europe that lasted just 14 months, when fighting resumed under the Third Coalition (1803 - 1806).

This fan is undated and unattributed. It was likely printed in Paris and can be dated somewhat from its content. Napoleon here is presented with long flowing hair, a look that changed dramatically in 1798-99. While campaigning in Egypt, Napoleon cropped his hair short against the heat, and some argue, to hide his unusual balding pattern and more closely resemble his idol, Julius Caesar. It is unlikely that this image significantly postdates Napoleon's hairstyle change. Napoleon's calls for 'Freedom of the Seas' began around 1800, after the French army returned from Egypt, when it was attempting to marshal allies to fight at his side in the War of the Second Coalition (1798 - 1802). This fan-map is of the utmost rarity, we know of no other cataloged examples.

Engraved, hand-colored paper fan mounted on 20 wooden sticks fastened by a mother-of-pearl button. Slight wear on the fold lines and minor staining.
Looking for a high-resolution scan of this?