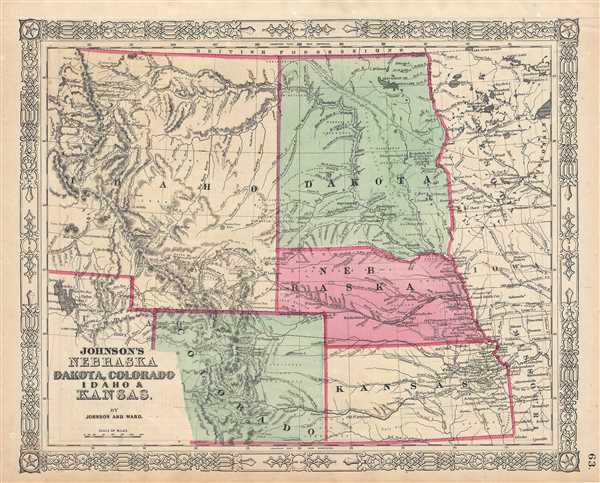 This is Johnson and Ward’s beautifully hand colored 1866 map of the territories of Idaho, Nebraska, Colorado and Kansas. Depicts what today consists of the states of Idaho, Wyoming, Colorado, Montana, North Dakota, South Dakota, Nebraska and Kansas. Extends west as far as the Great Salt Lake and east to Lake Superior, depicting the area during an interesting transitional phase shortly following the formation of the Idaho Territory in 1863, but predating the formation of Montana in 1864 and Wyoming. Thus we see a massive Idaho consisting of all of modern day Wyoming, Idaho and Montana. The newly created territory of Colorado (1861) appears in the lower left. Crisscrossed throughout with wagon trails and explorer's routes, shows the three proposed routes of the Pacific Railroad including the northern route, as suggested by Governor Stevens, the central route proposed by Lieutenant Beckwith, and the southern route as suggested by Captain Gunnison. Features the fretwork border common to Johnson's atlas work from 1863 to 1869. Steel plate engraving prepared by A. J. Johnson for publication as plate no. 63 in the 1866 edition of his New Illustrated Atlas.