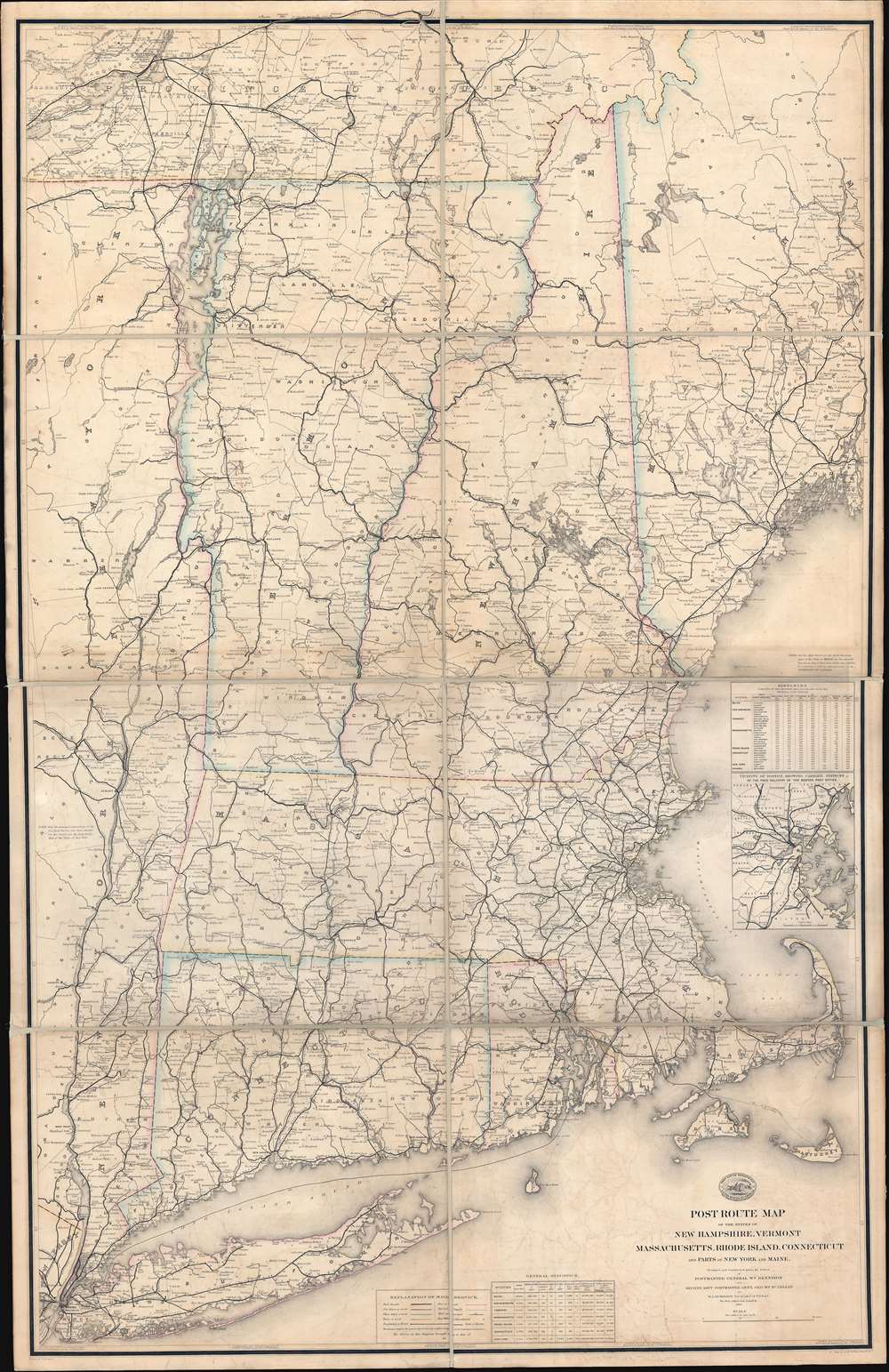 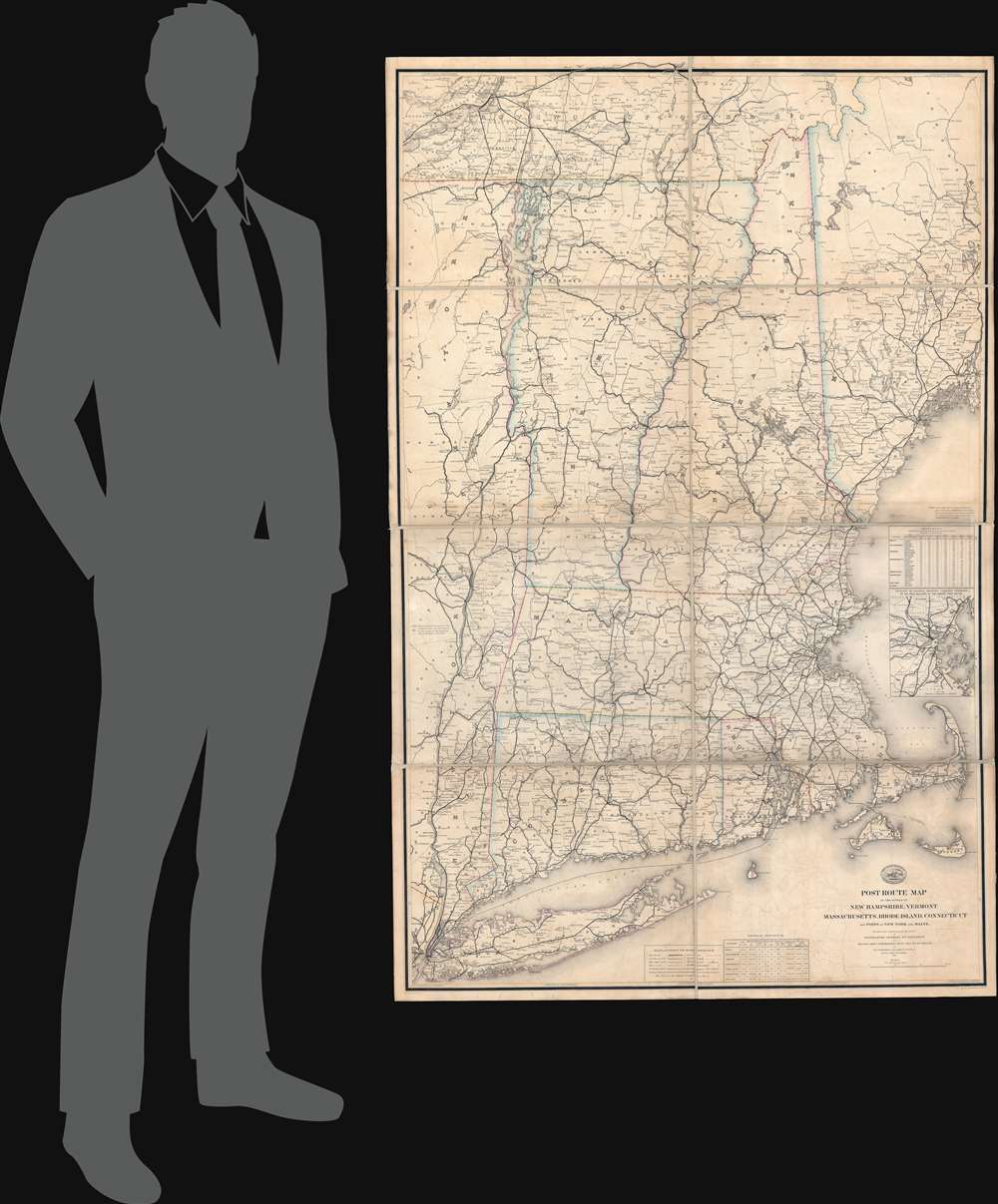 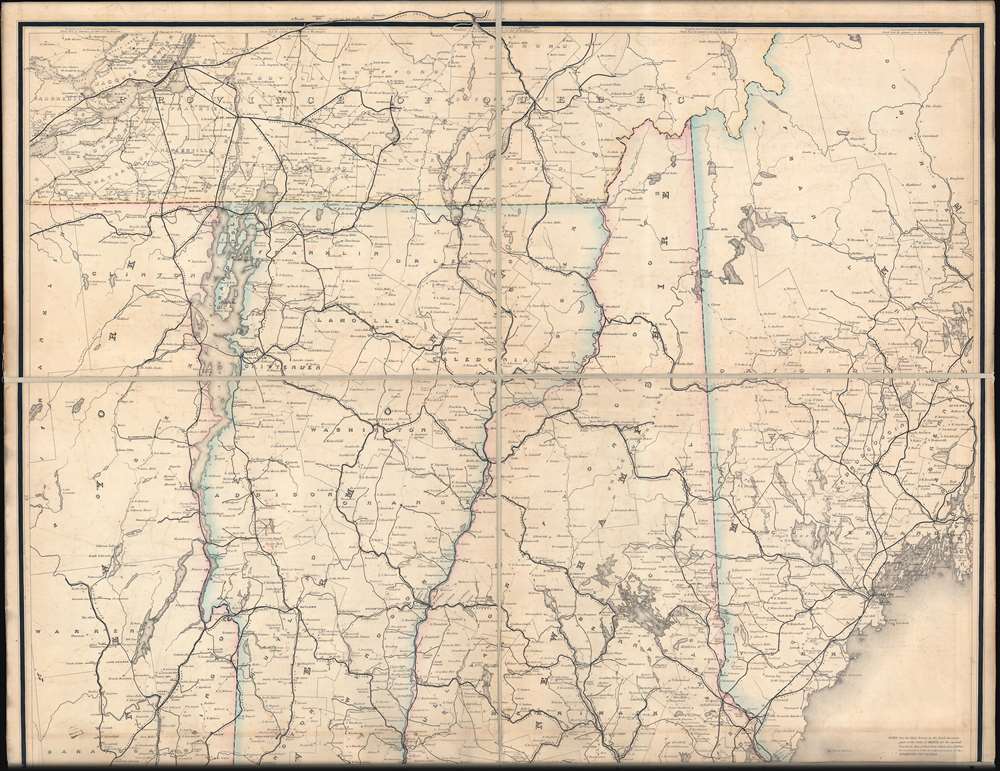 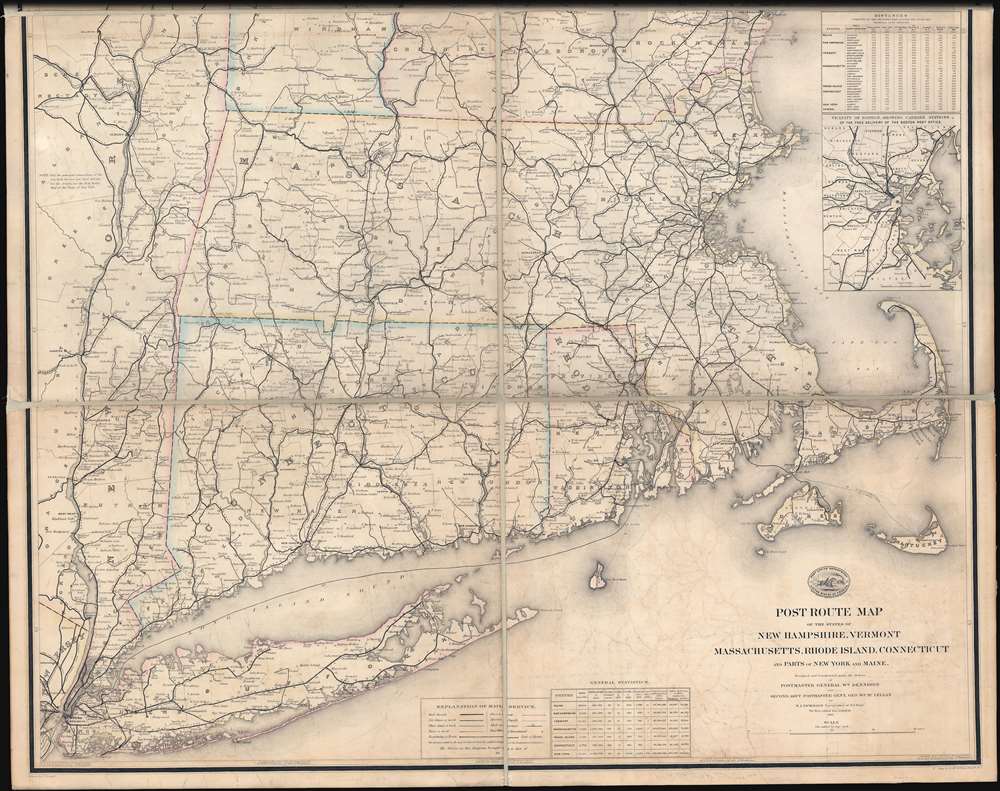 An enormous highly detailed 1878 map of the New England states issued for internal use by the United States Postal Service - with highlighting of … gold mines?! As might be expected from an operation as large and complex as the USPS, the map offers impressive detail, noting road and railroads throughout, as well as milage from town to town. A table in the lower left suggests that this map should have color coding indicating postal routes and frequency of use, but none of that is present here. What is present are an extensive series of manuscript markings and annotations in Vermont. While at first incomprehensible, according to a note on the verso title plate, the map was 'marked for mines.'

Vermont never had a major mining industry. Nonetheless, from about 1850, people began discovering gold in Vermont, sparking a mini-gold rush. It is claimed that miners returning home from the California Gold Rush (1849) noted a topographical similarity with the Sacramento Valley. The first alluvial gold in Vermont was discovered near Killington. Subsequent state geological surveys note alluvial gold discoveries throughout the state - much of which correspond loosely to the manuscript annotations here. Ultimately, although there was (and is) gold in Vermont, the deposits were small enough to make serious mining and prospecting impractical. Today there are but 2 mines active in the state.

Maps of the Postal Service

From its earliest days, the Department of the Post Office was one of the largest and most hard-working elements of the United States federal government. Its mandate to deliver mail to every part of the country required the best possible maps, which entailed employing the best cartographers, topographers, surveyors, and engravers. Postal map making began with Abraham Bradley, who published maps from 1796 to about 1825. Afterwards, work was taken up by H. W. Swift (1830 - 1833), then David H. Burr (1803 - 1875), who became the department's first official 'Topographer.' Burr was followed in this position by his brother Henry A. Burr (1809 - March 1863) who held that position until 1862. He was followed in 1862 by Walter Lamb Nicholson, the maker of this map, who remained as Topographer of the Post Office until 1887, when he retired and was replaced by Charles Roeser Jr.

The following description of the Postal Topographer's work is drawn from Arthur Hecht's Records of the Columbia Historical Society, vol 50, pages 95 - 104,

The work of the Topographer's Office consisted of projecting and compiling the original drawings of postal route maps of the general edition to replace old, worn-out, and inaccurate maps, and of tracing and lettering them for photolithography, preparing special drawings of enlarged sub-maps of the environs of the principal cities, making sample diagrams of special editions of states and territories for the Railway Mail Service to exhibit the different lines and their connecting side mail routes, and testing new photolithographic maps received from the contract.

This map was first issued in 1866. It was drawn by Paul Goepel and compiled by postal topographer Walter L. Nicholson. It was engraved and printed by David McClelland in Washington D.C. The map required constant updating and revision, so there are multiple states and editions published from 1866 to about 1900. While the official nature of the map means that it is well represented in institutional and government collections, it is extremely scarce to the private market.

Walter Lamb Nicholson (April 27, 1825 - April 13, 1895) was a topographer working with the United States Postal Service in the second half of the 19th century. Nicholson was born in Edinburgh, Scotland, where he trained as a civil engineer. He emigrated to the United States in 1856, registered for the draft in the American Civil War (1861 - 1865) in 1863, and naturalized as U.S. Citizen in 1873. By 1860 he was working in Washington D.C. as a lithographer with the U.S. Coast Survey, where he introduced photolithographic technology. On July 15, 1861, he transitioned to the Postal Department, where he succeeded Henry A. Burr (1809 - 1863) as official 'Topographer'. He issued numerous important postal route maps from about 1866 to his retirement in 1887. His postal maps continued to be used and updated by subsequent Postal Topographers until about 1900. Learn More...


Paul Goepel (February 24, 1744 - June 17, 1913) was a clerk and draughtsman active with the Topographic Office of the United States Postal Service in Washington D.C. during the mid to late 19th century. Goepel was born in Stuttgart, Württemberg, Germany. He emigrated to the United States in August of 1863, settling in Washington D.C. Goepel was naturalized as a U.S. Citizen in 1868, while he was a student at Columbian College of Arts and Sciences (George Washington University). Shortly there after he began working with the United States Postal Service. He appears in city directories and Post Office records as a Clerk to about 1870, after which he is registered as a Topographical Draughtsman. Upon retirement he relocated to Hoboken, New Jersey and later New York City. His son, Carl Paul Goepel (1879 - 19??), was a Patent Counsel in the Washington D.C. Patent Office. Learn More...