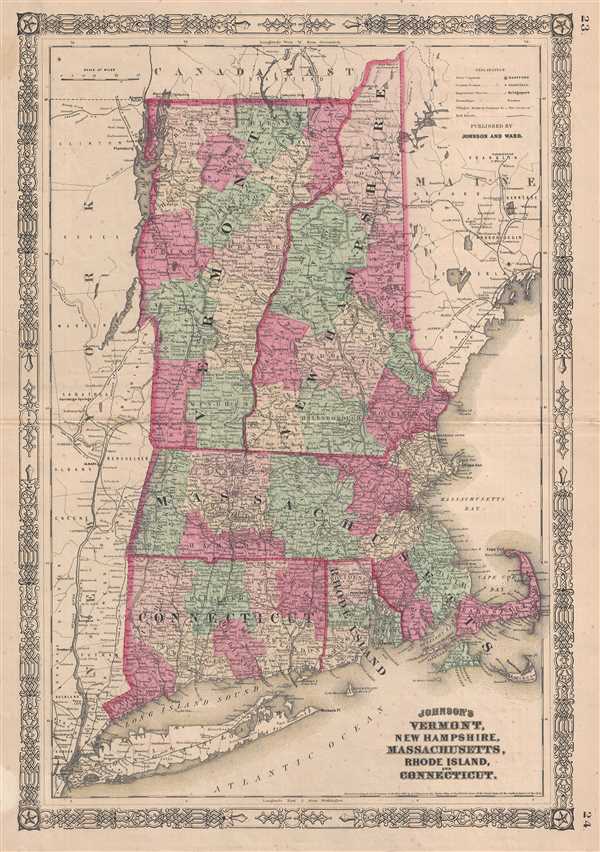 This is a beautiful example of Johnson and Ward's 1865 map of New England. The map depicts the New England from Long Island to Maine and from the Hudson Valley to the Atlantic Seabord. Numerous cities, towns, and townships are labeled, along with counties. Several railroads are illustrataed and labeled. Relief is shown by hachure. The map features the fretwork style border common to Johnson’s atlas work from 1864 to 1869.

Published by A. J. Johnson and Ward as plate nos. 23 and 24 in the 1865 edition of Johnson’s New Illustrated Family Atlas. This is the first edition of the Johnson Atlas to be attributed to Johnson exclusively.

Johnson, A. J., Johnson's New Illustrated Family Atlas of The World with Physical Geography, and with Descriptions Geographical, Statistical, and Historic including The Latest Federal Census, A Geographical Index, and a Chronological History of the Civil War in America, (New York) 1865. 404 Not Found