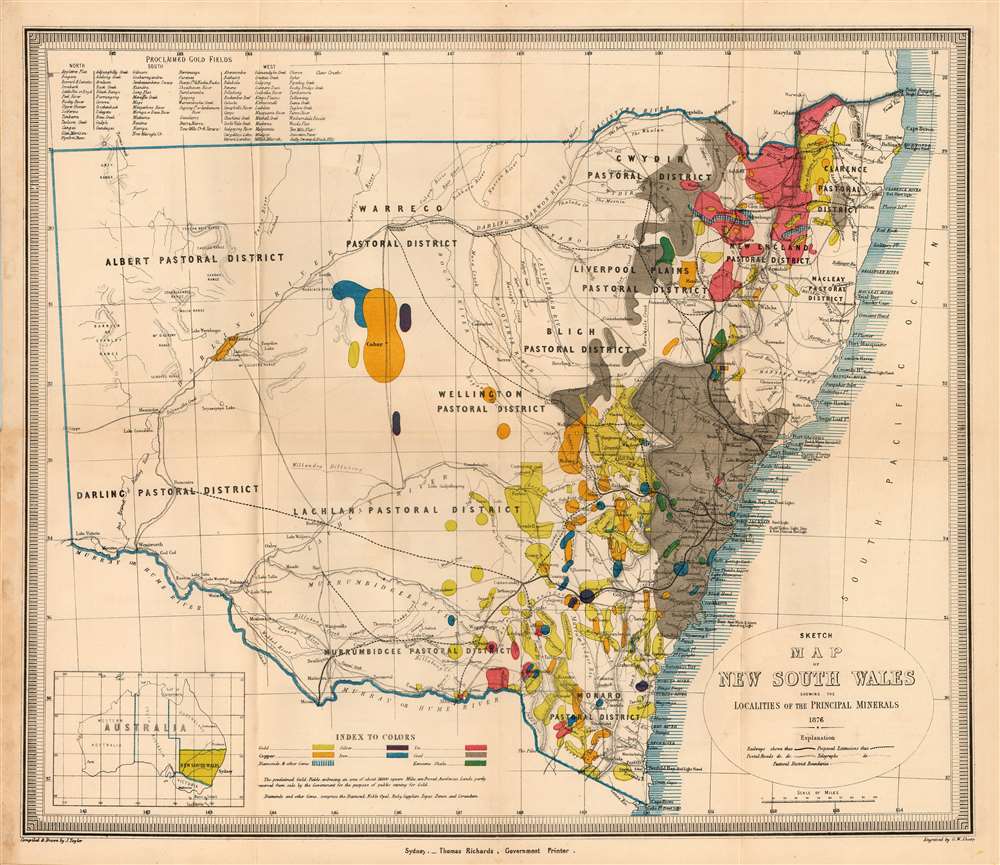 Encouraging the Expansion of Mining in New South Wales
$950.00

This is an 1876 Map of New South Wales, printed by Thomas Richards, the colonial government printer to emphasize the breadth and richness of the colony's mineral resources, in particular its gold fields.

Gold was known to be present in Australia prior to 1851, but the intentional suppression of this information by the colonial government of New South Wales prevented all-out gold rushes. When gold was discovered at Sutter's Mill, California, in 1848, causing the California Gold Rush, the colonial government rethought their position, and encouraged the exploitation of gold and other mineral resources in order to stem an exodus of prospectors from Australia to California. This led to the first major Australian gold rush when prospector Edward Hargraves discovered gold at Ophir, shown on this map near Orange. A series of subsequent discoveries followed, transforming the Australian economy and leading to a rush of new immigration. Gold strikes in the Port Phillip District region of New South Wales from 1851 until 1869 led to a massive population boom here, with the result that the British government allowed the District to secede from New South Wales to create the Colony of Victoria. The remaining portion of New South Wales continued prosperously on the strength of its wool production, but this map suggests that with further exploitation of mineral resources, the moment could not but represent (as the map's foreword puts it) 'a singularly advantageous point of departure for a magnificent future.'

The map shows New South Wales' new (and current) boundaries, with the state's 'Pastoral Districts' delineated; railways from Ports Hunter and Jackson are shown, along with their proposed extensions inland. Roads and telegraph lines are also indicated. Relief is shown by hachure. An inset map in the lower left shows the state's location on the Australian continent. These features are shared by the authors' other maps of New South Wales, the 1871 Map of New South Wales and the 1878 Sketch map of New South Wales showing the principal agricultural districts. Specific to this map, areas printed in color show the regions understood to be rich in minerals: Kerosene shale, coal, tin, iron, silver, copper, gold and 'diamonds and other gems.' The data on the map reflects the experience of some twenty years of prospecting in New South Wales, but predate the first systematic geological survey of the state, which would not be completed until 1880. The map specifies that the gold fields are 'proclaimed' gold fields, that is to say, permissible for prospectors. No prospector's claim was valid unless it fell within the limits of a 'proclaimed' field, which was officially recognized by the state and administered by a commissioner. The earlier 1873 edition of this map distinguishes between 'proclaimed' and 'unproclaimed' fields; in the present edition, the 'unproclaimed' fields have disappeared entirely. By 1876, control of gold mining in the state had passed from the Department of Lands to a new administration, the Department of Mines; in conjunction with this, mining had become less of a prospector-driven, 'gold rush' affair and more the province of mining companies employing more sophisticated processes, capable of extracting wealth from existing claims in which lower-capitalized operations were ineffective.

The map is well represented in institutional collections, but is scarce on the market: we are aware of three examples that have appeared in dealers' catalogues in the past ten years.

Thomas Richards (December 21, 1831 - August 31, 1898) was an Australian printer. In 1845 he was made an apprentice in the Government Printing Office, where he advanced steadily through the organization until becoming superintendent in 1854. In 1859 he became government printer, overseeing a staff of seventy - a controversial appointment for a provincial. His tenure saw innovations in printing techniques: he introduced photo-lithography, stereo-typing and electro-typing. In 1868 he instituted a new fast process of photo-lithography invented by John Sharkey, and initiated helio-type or photo-mechanical printing. He intended to produce an Australian geography and natural history, a year-book and dictionary of names for New South Wales, but sadlybudgetary concerns prevented him from this diversion. His efforts to advance the printers’ art earned him awards at the 1878 Paris Universal Exhibition, the 1880 Melbourne International Exhibition, and the 1883 Amsterdam Exhibition . Finally, in 1882 he was able to produce a history of New South Wales. In addition to his work as a printer, he served as an officer in the Volunteer Rifles, rising to the position of lieutenant-colonel of the first regiment, Volunteer Infantry. Learn More...


J. Tayler (fl. 1861-1875) was an Australian cartographer and draftsman, likely in the employ of the Surveyor General’s Office. His 1871 Map of New South Wales appears to have provided the basis for the bulk of the maps of the state produced prior to the geological survey of 1880. Learn More...