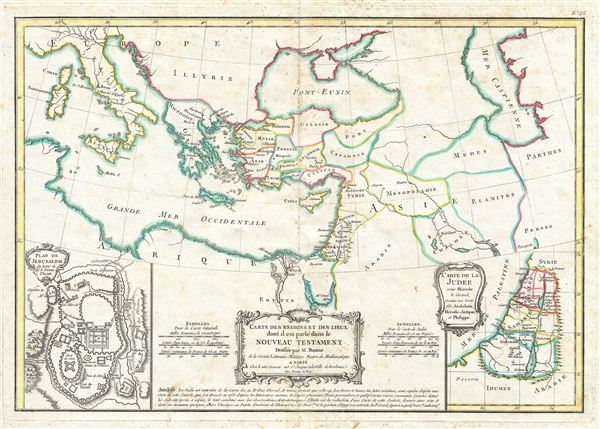 A beautiful example of Rigobert Bonne's 1783 decorative map of the lands of the Bible's New Testament. Bonne's map covers from Italy eastward to include the eastern Mediterranean, parts of Africa, egypt, Persia, Arabia and Asia Minor. It includes both the Black Sea (Pont-euxin) and the Caspian Sea (Mer Caspienne). Numerous Biblical sites noted throughout. An inset in the lower left quadrant details the city of Jerusalem in the times of Jesus Christ. The Temple, the Fort of Sion, the Palace of Solomon, the Mount of Olives, and many other well-known Biblical sites are identified. A second inset in the lower right quadrant focuses on Judea under King Herod. A decorative baroque title cartouche appears at the bottom center. Drawn by R. Bonne in 1783 for issue as plate no. 36 in Jean Lattre's 1783 final issue of the Atlas Moderne.