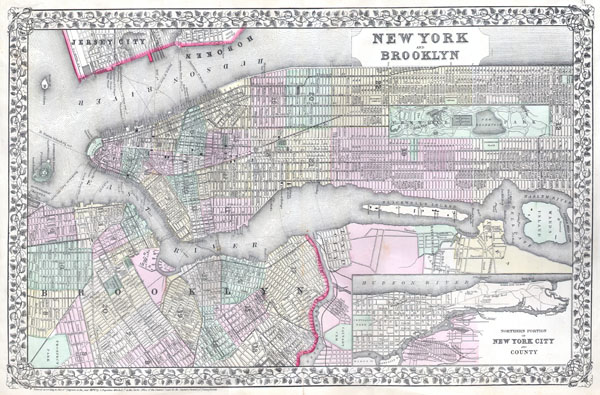 This beautiful hand colored map is a lithographic engraving of New York City, dating to 1867, by the legendary American map publisher S.A. Mitchell, the younger. Includes in inset map of Upper Manhattan and parts of Queens. Superb detail at the street level including the indication of individual buildings. Shows the various ferry routes between New York and Jersey City, as well as between Manhattan and Brooklyn. Central Park shown in its completed state. This is the first of the Mitchell series to depict Manhattan in full and on the horizontal. Dated and copyrighted ' Entered according to Act of Congress in the year 1867 by S. Agustus Mitchell in the Clerks Office of the District Court for the Eastern District of Pennsylvania.'