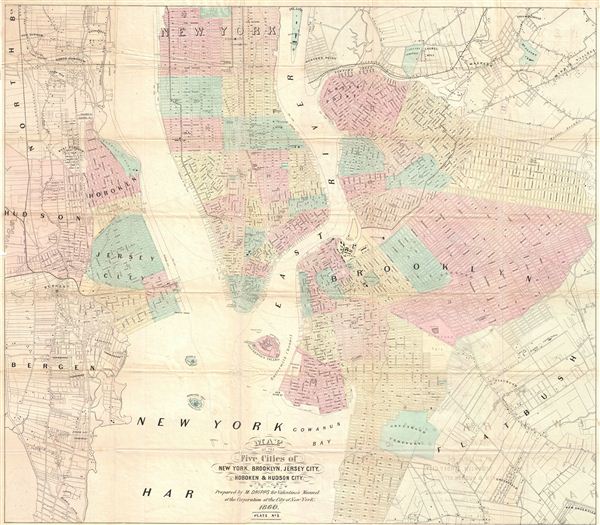 A beautiful example of M. Dripps' map of New York City, Brooklyn, Jersey City, Hoboken and Hudson County, published as plate 2 in the 1860 edition of Valentine's Manual. A great source for understanding what Brooklyn and Jersey City/Hoboken looked like in he mid-1800s, including the use of Flatbush, Brooklyn for such NIMBY institutions as a Lunatic Asylum and Alms House, and the eerie Canal Railroad starting from Jersey City docs.


Matthew Dripps (1812 – April 9, 1896) was an Irish-born American mapmaker active in Philadelphia and New York during the second half of the 19th century. Dripps was born in Gracefield, Ireland. In Ireland, probably Belfast, he worked as a grocer. Dripps immigrated to American from Belfast on the Patrick Henry in 1849, arriving in Philadelphia, where he connected with the Reformed Presbyterian Church and worked briefly as a tax collector. His earliest recorded maps, depicting Philadelphia, appeared during this period. Dripps relocated to Brooklyn, New York in 1850, setting up shop as a map publisher. His two largest maps were published in the following years, 1850 and 1851, and combine to form an enormous map of Manhattan. These gained him the attention of the City Council, who used his maps for census and government work. Afterwards, he issued other large format New York City and Brooklyn maps as well as smaller maps for the New York City Clerk's office. He was married to Ameila Millar Dripps with whom he had six children, among them Amelia Dripps and the clergyman Joseph Frederick. Dripps is interred at Greewood Cemetery, Brooklyn. Learn More...

Good. Some wear on Folds.
Looking for a high-resolution scan of this?