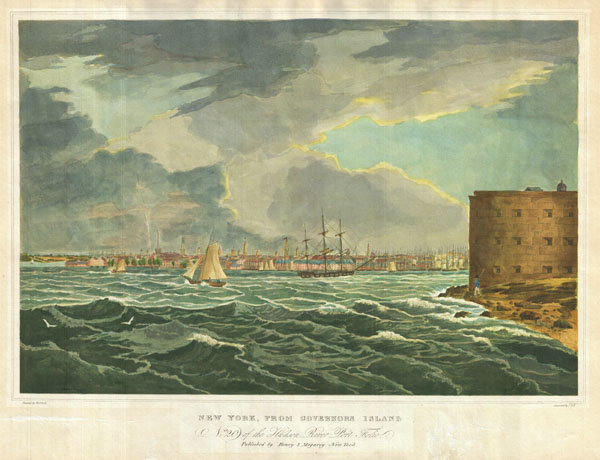 One of the most influential views of New York City ever published.

A rare find, this is plate no. 20 from William G. Wall, and Henry L. Megarey's important 1825 Hudson River Port Folio. The Hudson River Port Folio is considered to be the first and finest set of views of the Hudson River ever published. The Port Folio consists of 20 aquatint views of the Hudson River as it traverses some 315 miles from the Adirondacks to New York City. This, the 20th and final view in the series is considered to be the most desirable for its early and important depiction of New York City. This widely popular serious was instrumental in fostering the development of the Hudson River School of painting. The portfolio was based upon a series of watercolors by the Dublin-born artist William Guy Wall. The New York publisher Henry Megarey hired John Hill to create a series of aquatints based upon Wall's work. The result, published between 1821 and 1825, was a cost effective and popular series of views that led to widespread appreciation for the American indigenous landscape. Examples of the Hudson River Portfolio were issued in three editions, with some examples being hand colored by the publisher and some issued without color. This appears to be an uncolored issue to which color has been added at a later date.