1841 Smith, Elder and Co. Map of the New Zealand Colony 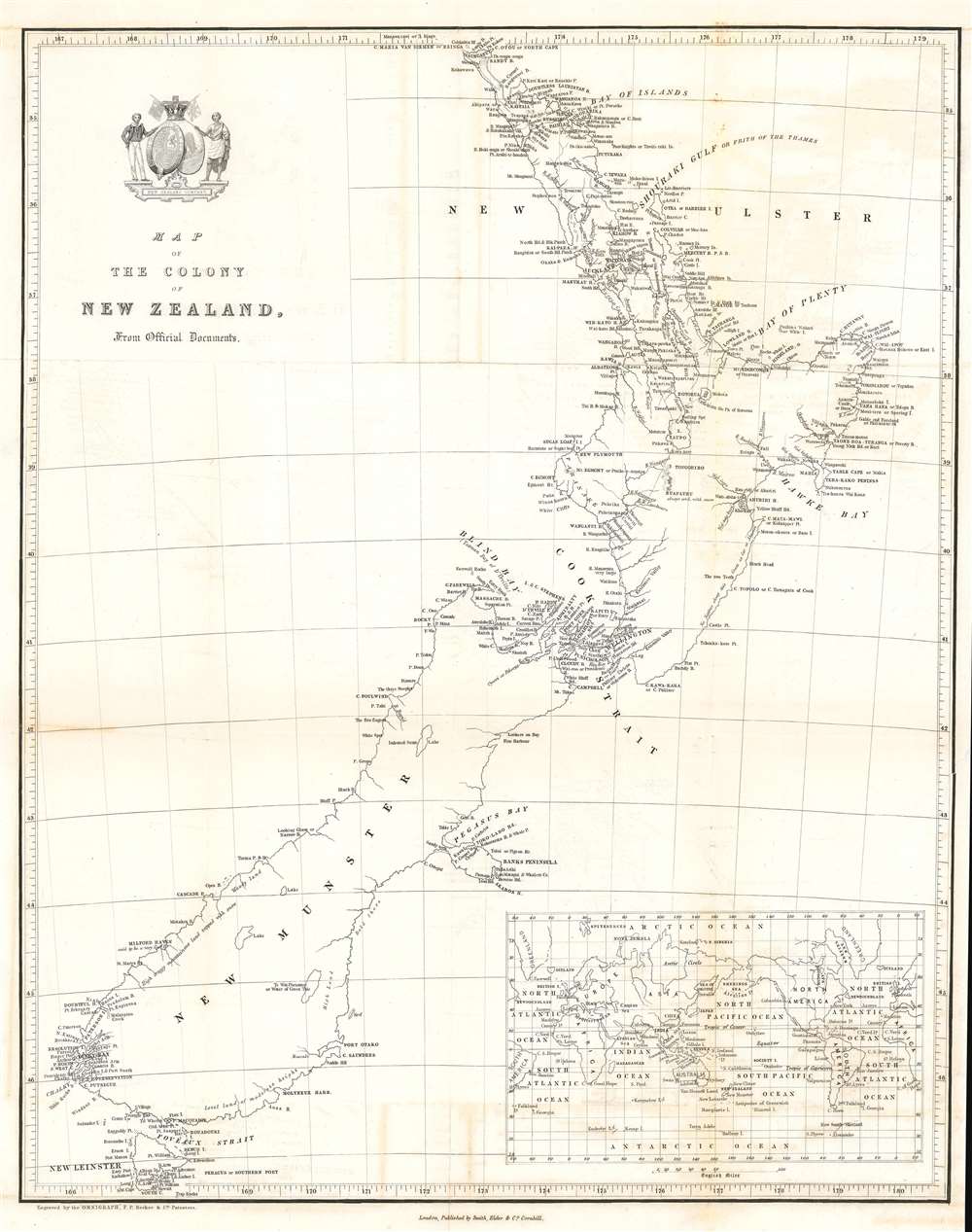 1841 Smith, Elder and Co. Map of the New Zealand Colony

One of the earliest maps of the colony of New Zealand.

This is a rare c. 1841 Smith, Elder and Company map of New Zealand issued soon after it became a British colony. One of the earliest maps of the New Zealand colony, the map depicts both the North and South Islands and labels several early settlements, including Auckland, New Plymouth, and Wellington. Although undated, the presence of Wellington solidifies that this map must have been produced after November 1840, when the directors of the New Zealand Company (whose crest adorns the title cartouche) decreed that the newly settled town at Lambton Harbor would henceforth be named after the Duke of Wellington, reflecting his support of the company’s principles of colonization. An inset map of the world in the lower right illustrates New Zealand's global location.

The New Zealand Company was originally founded in 1825, but garnered little attention and no government support. This failure came to the attention of Edward Gibbon Wakefield, an aspiring politician who was serving a three-year jail sentence for the abduction and forced marriage of 15-year-old heiress Ellen Turner, an event known as the Shringley Abduction. Wakefield was released from prison in 1830 and immediately became active in the National Colonial Society, forming the New Zealand Association, hoping it would succeed where the New Zealand Company failed. He chaired its first meeting on May 22, 1837, but the association faced instant opposition from both the government and the missionary societies. By September 1837 discussions were already occurring to merge the New Zealand Association with the aforementioned New Zealand Company. The organizations failed twice to meet the requirements for a Royal Charter, but in 1839, the merged organizations formed the New Zealand Land Company.

The 'Tory', Buying Land, and the Treaty of Waitangi

That same year the newly-formed company sent Colonel William Wakefield, Edward Gibbon Wakefield’s uncle, aboard the first of three vessels to buy land for the first British settlement in New Zealand. Wakefield arrived in mid-August and set about acquiring land from the Maori with the help of Dicky Barrett, a whaler and trader who had lived among the Maori since 1828. Wakefield eventually purchased 20 million acres of land after securing signatures and marks on parchment that were assumed grant ownership. This land purchasing continued until the signing of the Treaty of Waitangi on February 6, 1840. This treaty made it illegal for anyone to purchase land from the Maori other than the British Crown, which put the New Zealand Company in a tough position. By August 1841, the government and the Company reached an agreement in which some, but not all of the land that the New Zealand Company had ‘purchased’ in 1839 could be resold by the Company.

The Settlement of Wellington

The settlement of Wellington was not an easy venture. Surveyor-General William Mein Smith began surveying his chosen settlement site in January of 1840. Smith chose a site, on the opposite side of Fitzroy Bay from where William Wakefield wanted the settlement. Smith’s chosen site was near arable land, but was also in the middle of dense forest, scrub, flax, and swamp, and close to a river that was prone to flooding. Also, its nearest beach was so flat that it forced the arriving colonists, who disembarked only days after Smith began his work, to disembark 1600 meters from the shore. Smith’s site was abandoned eight weeks later after a vote by the settlers, and moved the town to Wakefield’s preferred site on the southwest side of the harbor.

This map was created and published by Smith, Elder and Company c. 1841. Examples are catalogued in the OCLC as being part of the collections at the University of Auckland, the National Library of New Zealand, the State Library of New South Wales, the National Library of Australia, the Te Aka Matua Library at the Museum of New Zealand and at the University of Otago. It is rare on the private market.

Smith, Elder, and Company (1816 - 1917) was a publishing firm based in London that was founded by two Scottish men: George Smith (1789 - 1846) and Alexander Elder (1790 - 1876). Founded in 1816, Smith, Elder and Company’s first three years in business were spent selling pens, paper, pencils, ink, account books, and other similar items, along with both new and used books, journals, and musical scores. A major portion of their clientele was officers from the East India Company, which significantly helped build the firm’s financial strength. Three years later the firm entered the publishing world when they released Sermons and Expositions on Interesting Portions of Scripture by John Morison. A third partner, Patrick Stewart, joined the company in 1824, and the company moved to Cornhill. The firm continued publishing small works, particularly editions meant to be bought as gifts, until 1843 when George Smith’s son, George Murray Smith (March 18, 1824 – April 6, 1901), who had joined the firm in 1838 and worked his way up through the ranks to become head of the small publishing arm of the business, agreed to publish the first volume of Modern Painters by John Ruskin, which launched a very lucrative thirty-year relationship between the publishing house and Ruskin. Other major successes followed, but very few would compare to George Murray Smith’s decision to publish Charlotte Brontë’s Jane Eyre, which created a deep, personal friendship between the publisher and author. Smith also managed to entice many renowned authors to publish with the firm, including Robert Browning, William Makepeace Thackeray, and Anthony Trollope. Smith, Elder, and Company began publishing their well-received literary journal The Cornhill in 1859, which published serialized novels by both Trollope and Thackeray in its first year. The first issue reportedly sold 120,000 copies. The firm continued to see success in the late 19th century. But, after Reginald Smith, George Murray Smith’s son-in-law, died on December 26, 1916, no one was left to continue running the company. All book rights and remaining stock were bought by John Murray in May 1917. Learn More...


Francis Paul Becker (fl. 1837 - 1861) was a British artist and engraver who founded F.P. Becker and Company. He also patented 'omnigraphy', a process by which individual letters were punched and not engraved into the plate. Learn More...