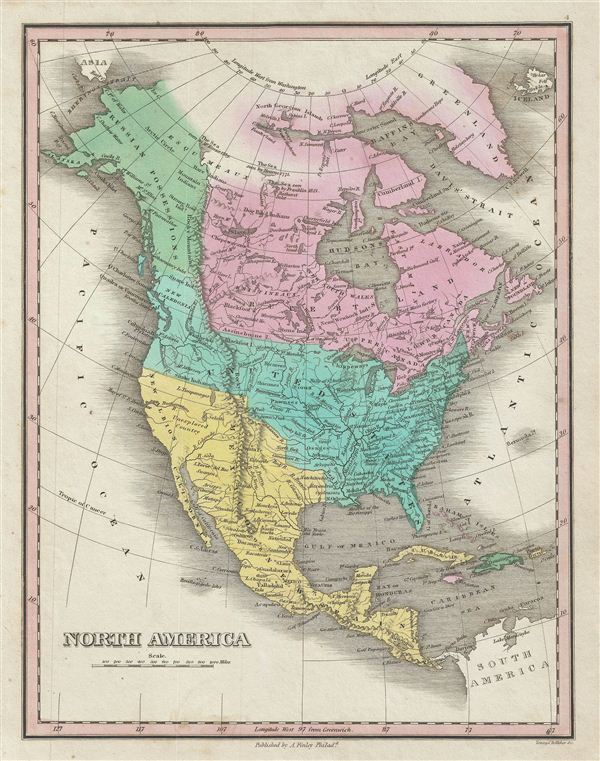 This is Finley's desirable 1827 map of the North America. Covers the continent from Panama to the Arctic Circle, including Greenland, Iceland, and the northwestern tip of Asia. Color coding according to country. Shows U.S. claims to British Columbia prior to the 1818 compromise that set the boundary at the 49th parallel. Border compromise added by original owner in manuscript annotation. Also shows Mexico's claims to Upper California, here labeled 'New Albion' and 'Unexplored Territory.'

Finley curiously charts two lakes in the Great Basin, one labeled Timpanagos and another smaller lake further south labeled 'Salt Lake.' The Great Salt Lake is said to have first been seen by Europeans in 1824, only a few years before this map was published, so it is unlikely that Finley drew from this exploration. Instead, Finely is following Escalante's discoveries as recorded on the Miera map. The Escalante expedition actually visited Utah Lake (Timpanagos), but only heard about the Great Salt Lake from local native American Ute tribe. Miera, Escalante's cartographer, thus mapped Timpanagos as much larger than the unseen 'Great Salt Lake.'

In addition, Finley maps the Buenaventura River running from the Rocky Mountains westward through 'Salt Lake' and westward to San Francisco Bay. The Buenaventura is the last incarnation of the apocryphal River of the West, a long sought after speculative alternative to the Northwest Passage. The mapping of Buenaventura here again references legitimate discoveries by Escalante of the White River and the Sevier River. In this case, both are mistakenly associated with the River of the West and given an erroneous outlet into San Francisco Bay.
There are additional notations on several Arctic expeditions in northern Canada by Kensir (1789), Hearne (1771) and Franklin (1821). Each identified a sea between the 60th and 70th parallel. Though not fuller explored until later, these are most likely the first sightings of Dolphin and Union Strait, Austin Bay, Coronation Gulf and the Dease Strait. These bodies of water lie between the North American mainland and Victoria Island.

Mile scale and title in the upper right quadrant. Engraved by Young and Delleker for the 1827 edition of Anthony Finley's General Atlas.

Good condition. Some minor discolorations in outer margin. Some manuscript annotations regarding the U.S. - Canada boundary in the upper left quadrant. Original pressmark. Blank on verso.