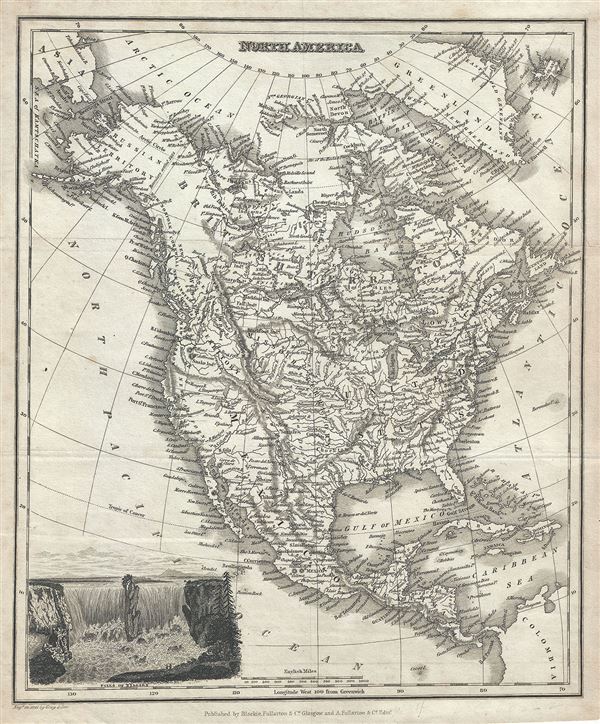 Map of North America with a view of the Niagara Falls.

This is a nice 1834 map of North America by Blackie, Fullarton and Company. The map covers the entire North American continent from the Arctic Circle to the Isthmus of Panama, embracing all of Central America, Mexico, the United States, modern day Canada and Alaska. It offers fine detail throughout with elevation rendered by hachure. Notes American Indian tribes including the Blackfoot Indians, Snare Indians, Beaver Indians, Fall Indians and others. Both the Great Salt Lake, identified as Timpanagos, and Utah Lake, identified as Lake Teguayo, are rendered following Humboldt.

The map also notes the apocryphal Buenaventura River running from the Rocky Mountains westward through 'Salt Lake' and westward to San Francisco Bay. The Buenaventura is the last incarnation of the apocryphal River of the West, a long sought after speculative alternative to the Northwest Passage. The mapping of Buenaventura here again references legitimate discoveries by Escalante of the White River and the Sevier River, mistakenly associated with the River of the West and given an erroneous outlet into San Francisco Bay.

This map is particularly interesting as it is one of the earliest maps to accurately depict the Northwest Passage, predating the Robert McClure expedition by more than 15 years. It correctly maps what are today called the Northwestern Passages between Baffin Bay and the Arctic Ocean. The mapping extends as far west as Melville Island and Banks Island, though does not include Prince Patrick Island. Even so, beyond Melville and Banks Islands, there is little but ice and seasonally open sea as far as Alaska and the Bering Straits.

Blackie and Sons (1809 - 1991) was a Glasgow based publishing firm active from 1807 to 1991. The firm was established on November 20 1809 by John Blackie Sr. (1782 - 1874), Archibald Fullerton and William Sumerville as "Blackie, Fullerton and Company". Though trained as a weaver, Blackie envisioned a profitable business selling large books and novels by monthly subscription. Their first major publications appeared in 1811 and were subscription based religious and reference texts including several atlases. In 1931 Blackie bought out his partners and formally named the firm "Blackie and Son". While Blackie and Son had its main offices 7 Stanhope Street, Glasgow, it maintained subsidiary offices in London (6/18 William IV Street Charing Cross), Canada and India. In the next 100 years Blackie and Son grew into an enormous international publishing concern. Nonetheless, it remained a family business and was run by members of the Blackie family until it ceased publishing in 1991. Learn More...