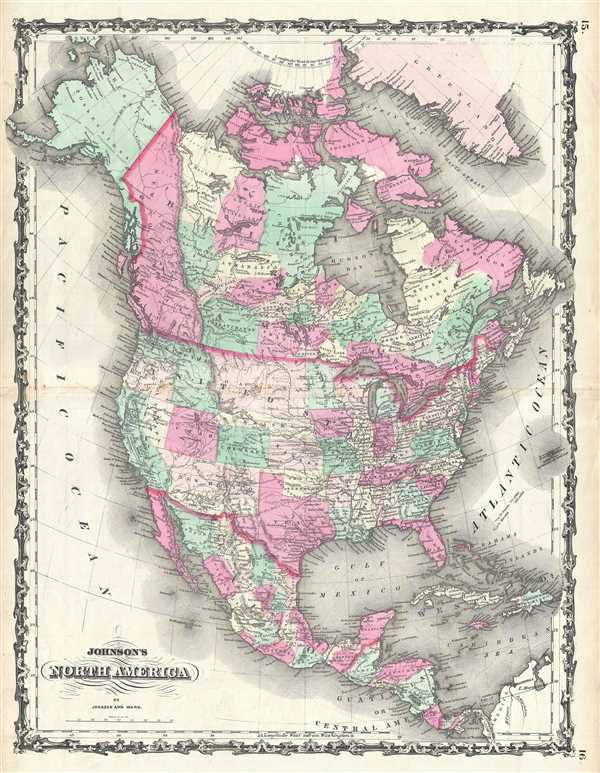 Johnson's overview of North America after the outbreak of the American Civil War.

A beautiful example of Johnson and Ward's 1863 map of North America. It offers a fascinating snapshot of North America, particularly the United States, Canada and Mexico, just after the outbreak of the American Civil War.

States roughly follow the 1861 configuration with archaic borders between Nevada and California and Nevada and Utah, whose capital is noted as Fillmore City. The new borders of Nevada as set in the territorial charter forced Johnson to revise his earlier map moving the California border westward to the Sierra Nevada range. This unusual choice infringed upon California's border charter inciting a border dispute between the two regions. The dispute was formally resolved in 1863 roughly according to the original California charter. This is the only example of Johnson's North America map to show Nevada's original territorial border configuration.

Several important transcontinental routes are shown, including the U.S. Mail Route through Texas and New Mexico and the Pony Express route to Sacramento. Also notes numerous American Indian tribes throughout. Canada and Mexico are shown in considerable detail with color coding according to region. Features the strapwork border common to Johnson's atlas maps from 1860 to 1863. Published by A. J. Johnson and Ward as plate nos. 15-16 in the scarce 1863 edition of Johnson's Family Atlas. This is the second edition of Johnson's atlas to bear the 'Johnson and Ward' imprint.

Very good. Minor wear and toning along original centerfold. Some spotting at places. Text on verso.