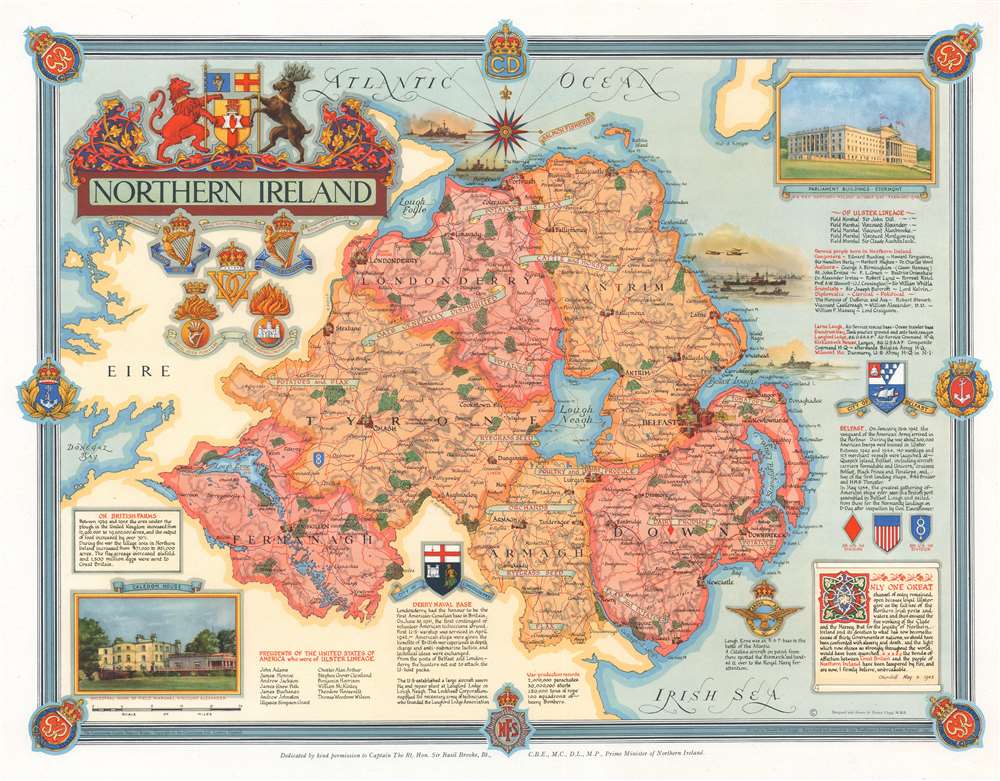 Northern Ireland's six counties are identified by block lettering and shaded different colors to allow for easy differentiation. Lough Neagh, Lough Foyle, and Lough Erne are present as well. Banners bearing red block lettering proclaims each region's agricultural products (and, by extension, their agricultural contribution to the war effort), including oats, potatoes, flax, orchards, cattle, and poultry. Cities and towns throughout Northern Ireland are labeled, including Belfast, Bangor, Londonderry, and Omagh, and Enniskillen, which are all highlighted by pictorial icons.

Pictorial vignettes illustrate warships and merchant ships in the seas off the Northern Irish coast, including part of the armada participating in the D-Day invasion of Normandy. Blocks of text situated along the border promote Northern Ireland's war-time contributions, including the importance of the Londonderry Naval Base, Belfast's harbor and shipyards, and of Royal Air Force (R.A.F.) bases. A quote from Sir Winston Churchill, dated May 6, 1943, credits Northern Ireland with being critical to the perseverance of the British people and their ultimate victory. A view situated in the upper right corner illustrates the Parliament Buildings, which housed R.A.F. Headquarters in Northern Ireland from October 1942 until February 1945. The other view, which adorns the lower left corner, depicts Caledon House, the ancestral home of Field Marshal Viscount Alexander. The insignia of five important Northern Irish units adorn the upper left corner as part of the decorative title cartouche.

This map was designed and drawn by Ernest Clegg, devised by Donald McCullogh, and reproduced and printed by John Waddington, Limited, in 1947. Five examples are cataloged in OCLC and are part of the institutional examples at the Library of Congress, the National Library of Scotland, the University of Cambridge, Stanford University, and the Biblioteca Comunale di Trento in Trento, Italy. An example is part of the David Rumsey Map Collection.