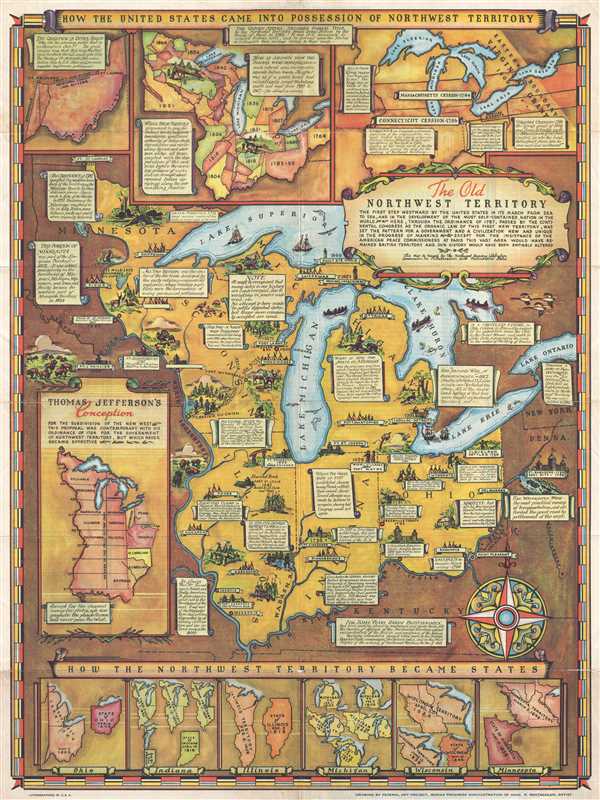 An uncommon 1937 pictorial map of the old Northwest Territory by Fred Rentschler. The map includes all five of the great lakes and focuses on the modern-day states of Minnesota, Wisconsin, Illinois, Indiana, Michigan, and Ohio. It includes numerous vignette illustrations referencing historic events, American Indian groups, and local folklore. The main map is surrounded by historical maps illustrating various ideas for the Northwest Territory ranging from the 'Thomas Jefferson Conception' to specific illustrations of the individual states in different configurations. The verso of the map features a transcript of the Ordinance of 1787 as well as additional historical text.

The map graphically celebrates the Ordinance of 1787, which created the Northwest Territory, and was one of the most influential legislative acts of congress ever passed. It established the precedent by which the Federal government would be sovereign over westward expansion through granting of land and the admission of new states, rather than through the expansion of existing states and their established sovereignty under the Articles of Confederation.

This map was drawn by Fred Rentschler for the Federal Art Project, Works Progress Administration (WPA) of Ohio. It was issued by the Northwest Territory Celebration Commission and published in Marietta, Ohio.

Fred Rentschler (fl. c. 1920 – c. 1943) was a Swiss-born American artist active in Cleveland, Ohio. Rentschler emigrated to the United States, settling in Cleveland, in the early 1920s. He later taught at the Cleveland School of Art. From 1935 to 1943 he was the head of the lithographic division at the Federal Art Project (WPA) in Cleveland. Rentschler's WPA artwork focused on adult education and challenged the viewer question his ignorances and rectify them. Learn More...