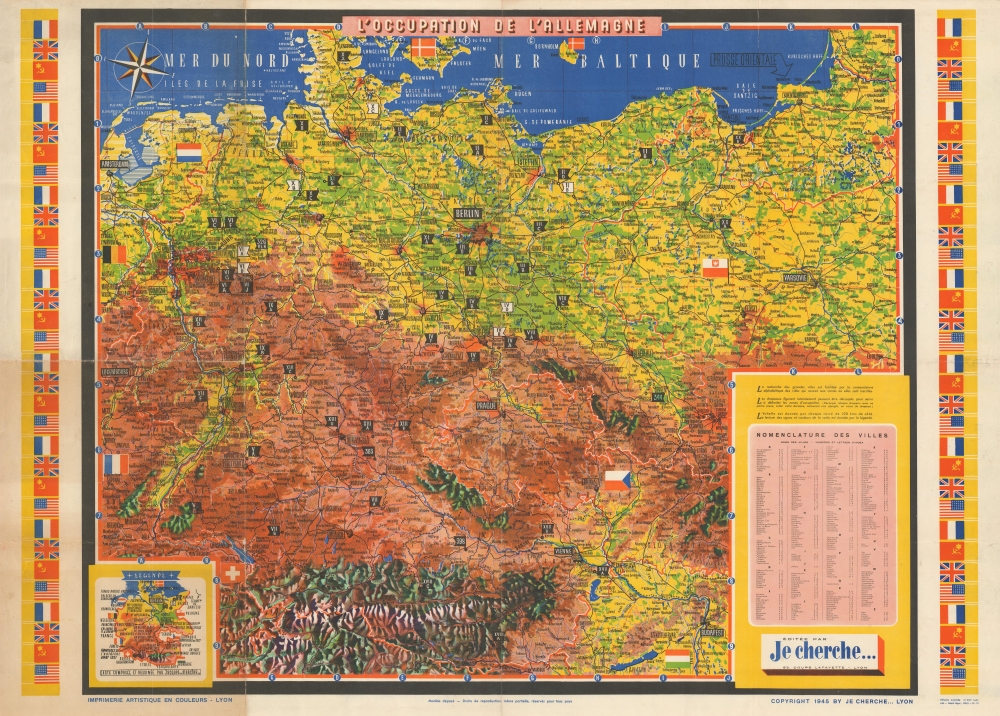 Likely printed before the Allied Occupation Zones were firmly established.
$1,250.00

This is a 1945 'Je Cherche' and Jacques Mercier map of Germany just after the end of World War II in Europe. Depicting from Belgium, Luxembourg, and France to Poland and from Denmark to Austria and Hungary, an extreme amount of detail appears throughout the piece. Cities, towns, and villages are labeled, including Berlin, Vienna, Prague, Bratislava, Budapest, Warsaw, and Amsterdam. Flags mark Nazi prisoner-of-war camps spread out across Germany and Austria. Nearly 100 camps were established by the Nazis during the war and housed hundreds of thousands of captured Allied soldiers. An inset map in the lower-left corner explains the various notations used, and a city index is situated along the right corner.

The Occupation of Germany and the Flags

A short text appears just above the city index and reads

The flags along the sides can be cut apart and used to mark occupation zones. (Cut out each flag with the yellow part, fold it, wrap it around a pin on the back of the flag.)

The fact that the occupation zones are meant to be marked in this way, and not printed directly on the map, implies that this map was published before the Allied occupation zones had been formally established. Mercier and 'Je cherche' must have felt that there would be some arguments and conflicts over the exact configuration of the zones, and thus chose not to print zones on the map, but allow the map's owner to follow the progress of the negotiations and be able to map the occupation accurately. The practice of making interactive maps was not uncommon in Europe during the war. Paris-soir, a newspaper in Paris, published a map of Europe at the beginning of the war the employed the same concept, which allowed people to follow the ever-changing war fronts without depending on acquiring a new map after every new development.

This map was created by Jacques Mercier and published by 'Je cherche' in 1945. We are aware of only one other known example, which is cataloged in OCLC as being part of the collection at the Université Bordeaux Montaigne.