1860 Dufour Map of Australia, Polynesia and the Pacific Ocean 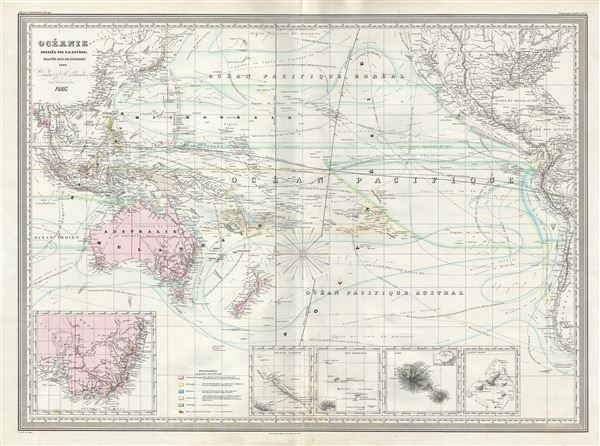 1860 Dufour Map of Australia, Polynesia and the Pacific Ocean

This is an impressive 1860 elephant folio map of Australia, New Zealand, Polynesia and the Pacific Ocean by A. H. Dufour. It covers from Burma (Myanmar) east as far as Chile and from Japan south to New Zealand. Although the interiors of the continents remain blank, the coastal regions are highly detailed. Numerous islands of Polynesia, Melanesia and Micronesia are noted. Five insets are features along the bottom border of the map. These include an inset of New South Wales, Australia, showing gold locations, New Caledonia, Martinique Island, Tahiti and the Gambier Archipelago.