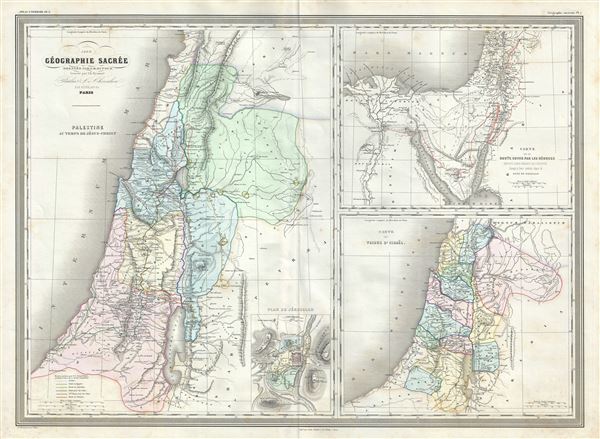 This is a beautiful large 1860 elephant folio map by A. H. Dufour. Essentially three maps on a single sheet, the large map on the left depicts Palestine or Israel or the Holy Land during the time of Jesus Christ. The map in the top right quadrant features the Egypt and the Sinai Peninsula and follows the journeys of the Israelites. The third map, in the lower right quadrant depicts the twelve tribes of Israel.

The large map on the left depicts the region during the time of Jesus Crist and includes the routes followed by Christ during the course of his Evangelical Mission. Both ancient and contemporary place names are noted throughout. An inset Plan of Jerusalem is included in the lower right quadrant of this map with all principal buildings identified.

The map in the lower right quadrant coves the region as it existed in Biblical times with divisions for each of the Tribes of Israel and include the modern day nations of Israel, Palestine, Lebanon, as well as parts of adjacent Syria and Jordan. Color coded according to the areas controlled by the Tribes of Israel, from the north these are Aser, Naphtali, Zabulon, Issachar, Manasseh, Ephraim, Benjamin, Dan, Juda, Simeon, Ruben, Gad and Manasseh Beyond Jordan.

The third map in top right quadrant shows the wanderings of the Israelites in the desert- a forty year episode from Exodus. The city of Ramesses is indicated as the starting point of the Biblical Exodus. We can follow their path as they fled out of Egypt, across the Red Sea, and subsequently spent the next forty years wandering the Sinai before migrating into the Promised Land by crossing the Jordan River just north of the Dead Sea.