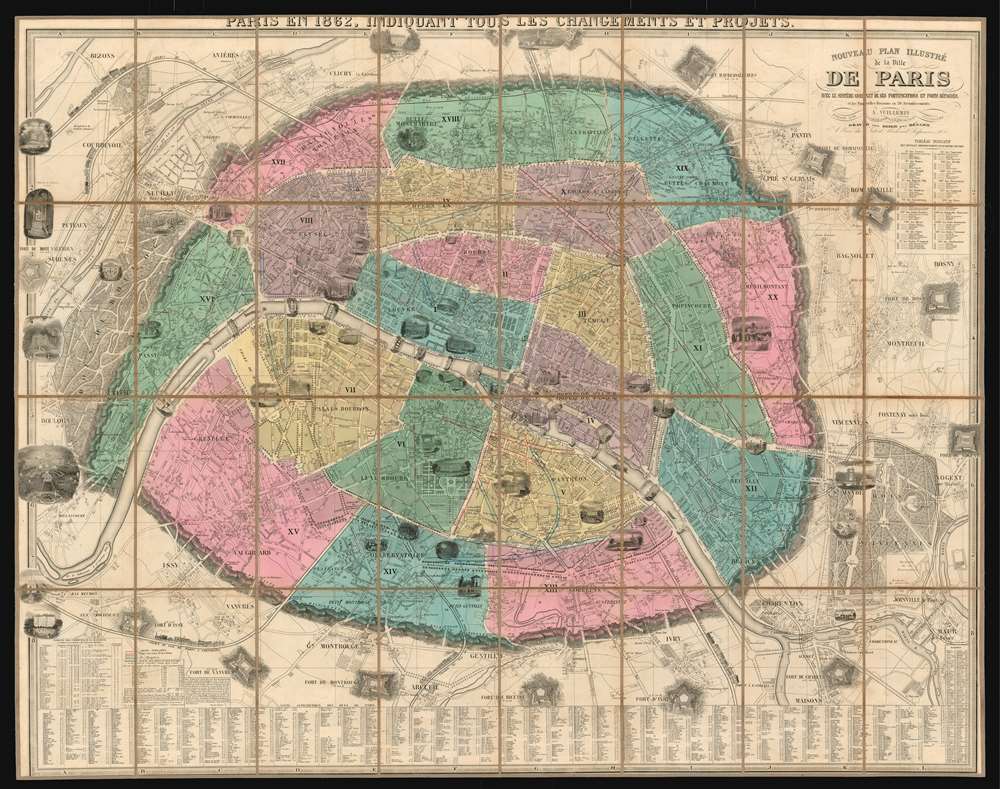 Paris During Urban Renewal Under Haussmann
$850.00

This is a spectacular 1862 folding wall map of Paris, France by the French cartographer Alexandre Vuillemin. This richly-detailed plan shows a city rapidly leaving its medieval past behind. It embraces Paris' 20 arrondisments, along with twelve surrounding forts and strongpoints. Dozens of architectural views depict important and historic buildings and parks. This frequently-updated plan highlights the current changes to Paris' plan under Haussmann: Superimposed over the original layout are the Rue de Turbigo, the Boulevard St. Germain, the Avenue de l'Opera, and many others. Five railroads, with trains charmingly illustrated, are shown leading in and out of the city.

This map was published at the height of the 'Grand Traveaux', the transformation of Paris by Emperor Napoléon III and Baron Georges-Eugène Haussmann. Completed between 1853 and 1870, the renovation of Paris consisted of the demolition of medieval neighborhoods that were deemed overcrowded and unhealthy; the building of wide avenues; new parks and squares; the annexation of the suburbs surrounding Paris; and the construction of new sewers, fountains and aqueducts. The work, however, continued until 1927. Known in French as the 'Grands Travaux,' Haussmann's redesign of Paris defined it as a modern city, with narrow alleyways and confusing streets replaced by a broad network of grand boulevards, imposing facades, parks, and monuments. Some of the more famous parts of Paris today, including the famous design of Étoile, where the Arc de Triomphe is located, were constructed during Haussmann's tenure as Prefect.

This map exhibits the Theirs Wall in all of its glory. Shocked seizure of Paris by foreign enemies during the 1814 Battle of Paris, the French King at the time, Louis-Philippe (1830 - 1848), conceived of a board network of walls and forts he believed would make Paris impregnable. The project was met with immediate opposition, some of which claimed that the walls were not defensive, but rather intended to control Parisians in the event of an anti-monarchal rebellion. Nonetheless, under a plan prepared by Marshal General Jean-de-Dieu Soult (1759 - 1861), construction began in 1841. The completed fortifications, named the Thiers Wall after the French Prime Minister at the time, Adolphe Theirs (1797 - 1877), were, at enormous expense, completed in 1844. The walls were 33 kilometers long and consisted of 94 bastions, 17 gates, 23 minor road crossings, and eight railroad gates. By 1919, advancements in military technology made the walls obsolete, leading them to be fully deconstructed by 1929 and replaced with the Boulevard Périphérique.

This map was first executed in 1844, with updated editions produced virtually every year until about 1865. Many editions appear catalogued in OCLC; this 1862 edition is however not among them, and it appears to be scarce on the market.