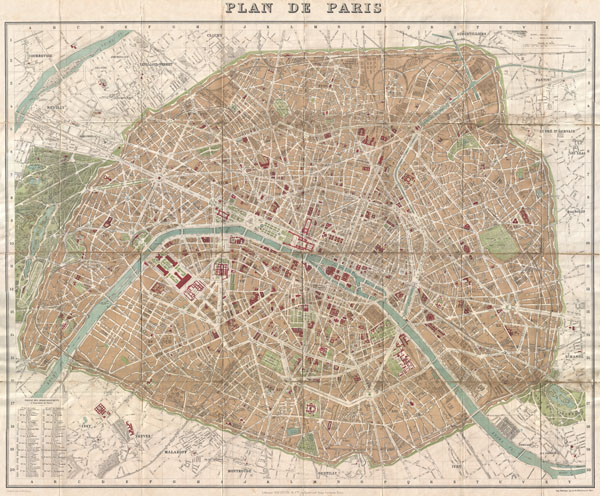 A rare and extremely attractive map of Paris, France drawn by A. Vuillemin and issued by the Librarie Hachette in 1894. Drawn shortly after the 1889 Exposition Universelle, this is one of the earlier maps of Paris to depict the Eiffel Tower. Considering its date, this is also likely to be one of the last pans of Paris to be issued with hand rather than machine coloring. Covers the old walled city of Paris from the Bois de Boulogne in the west to the Bois de Vincennes in the east. All streets are labeled as are various gardens, rail lines, parks, and important buildings including the Louvre, the Eiffel Tower, the Invalids, Notre Dame, and countless others. Accompanied by a multipage street index and its original gray binder.

Very good. Minor verso reinforcement and wear along original fold lines, else clean. Folds into original gray linen binder.
Looking for a high-resolution scan of this?