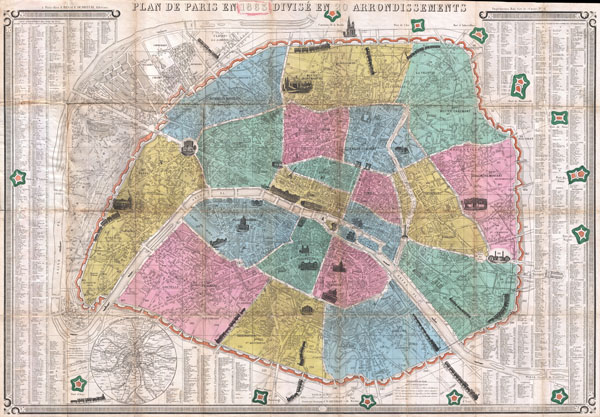 This is an extremely attractive 1863 tourist pocket map of Paris, France. Covers the old walled city of Paris and the immediate vicinity. Divided up into 20 arrondissments. Important buildings are shown in profile. Trains entering and leaving the city are also drawn in profile - a charming embellishment. The fourteen forts surrounding Paris are all noted. A street index, with most major and minor streets labeled, appears to the right and left of the map proper. Several small boats ply the Seine. A circular map of the Environs of Paris appears in the lower left quadrant. Keyboard style border. Prepared by J. N. Henriot for F. Dubreuil in 1863.

Very good. Original folds exhibit some wear and minor toning. Attached to original booklet.
Looking for a high-resolution scan of this?