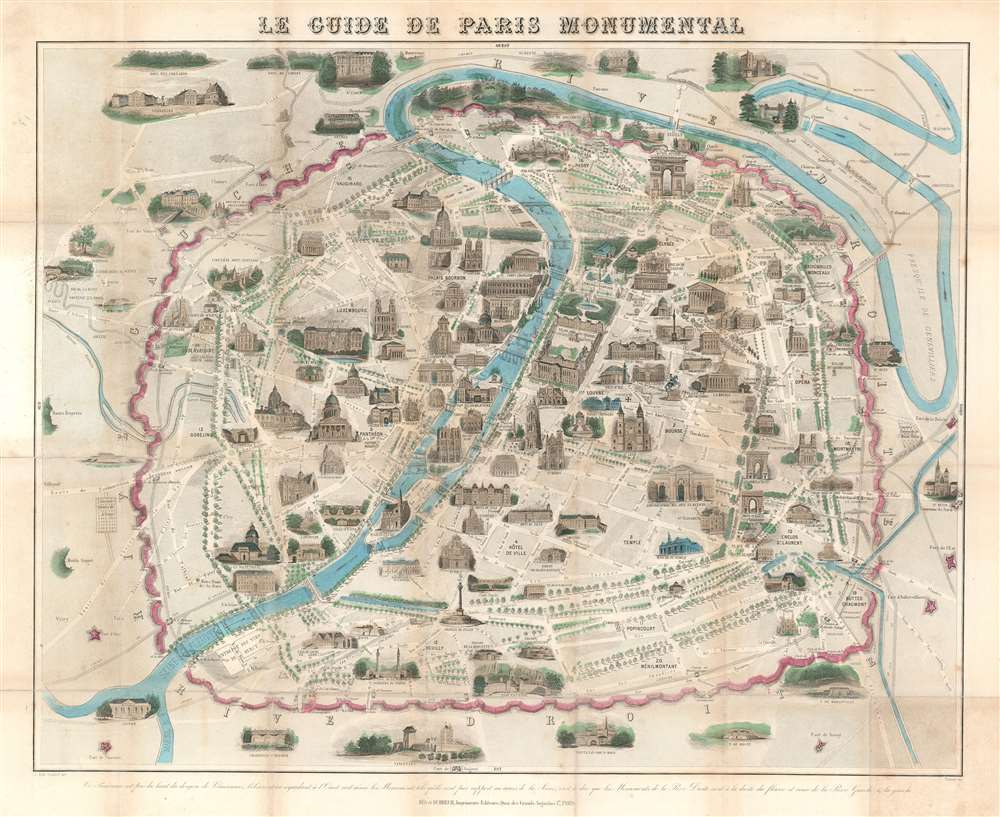 Overlooks Paris from the east and illustrates the Louvre, Notre Dame, and the Arc de Triomphe.
$650.00

Overlooking Paris from the east, this 1878 Jacques-Alphonse Testard pictorial map of Paris presents the 'City of Light' from a unique perspective. Drawn 'from' the donjon at the Château de Vincennes, Pere Lachaise cemetery and the Gare de Lyon are prominant in the foreground. Paris's other monuments line both banks of the Seine, which bisects the map. The Pantheon, Notre Dame, the Louvre, the Arc de Triomphe, and Les Invalides are all illustrated in profile. The city's streets wind their way from one end of the city to the other, with many of Baron Haussmann's Grands Boulevards illustrated and labeled. Paris's old city walls, colored pink, encircle the city, along with several railroad lines.

This map exhibits the Theirs Wall, completed in 1844. Shocked seizure of Paris by foreign enemies during the 1814 Battle of Paris, the French King at the time, Louis-Philippe (1830 - 1848), conceived of a board network of walls and forts he believed would make Paris impregnable. The project was met with immediate opposition, some of which claimed that the walls were not defensive, but rather intended to control Parisians in the event of an anti-monarchal rebellion. Nonetheless, under a plan prepared by Marshal General Jean-de-Dieu Soult (1759 - 1861), construction began in 1841. The completed fortifications, named the Thiers Wall after the French Prime Minister at the time, Adolphe Theirs (1797 - 1877), were, at enormous expense, completed in 1844. The walls were 33 kilometers long and consisted of 94 bastions, 17 gates, 23 minor road crossings, and eight railroad gates. By 1919, advancements in military technology made the walls obsolete, leading them to be fully deconstructed by 1929 and replaced with the Boulevard Périphérique.

This map was drawn by Jacques-Alphonse Testard, engraved by Jean-Émile Boulard, and published by Bès et Dubreuil in 1878. Four examples are cataloged in OCLC and are part of the institutional collections at Harvard, the University of Illinois Urbana-Champaign, the Bibliothèque nationale de France, the Royal Danish Library.

Jacques-Alphonse Testard (1810 - 18xx) was a French artist and engraver active in Paris during the mid- and late-19th century. He is credited with more works as the artist than as the engraver. Learn More...


Jean-Émile Buland (October 25, 1857 - February 10, 1938) was a French engraver, painter, illustrator, and lithographer. Buland studied at the École des Beaux-Art de Paris, where he studied under painter Alexandre Cabanel and engraver Louis-Pierre Henriquel-Dupont. He received many during his career, including a silver medal at the 1900 Universal Exposition, and was made a knight of the Legion of Honor in 1903. His brother, Jean-Eugène Buland, was a successful painter. Learn More...

Good. Some wear and toning on old fold lines. Laid down on archival tissue for stability and to repair a few old fold splits.