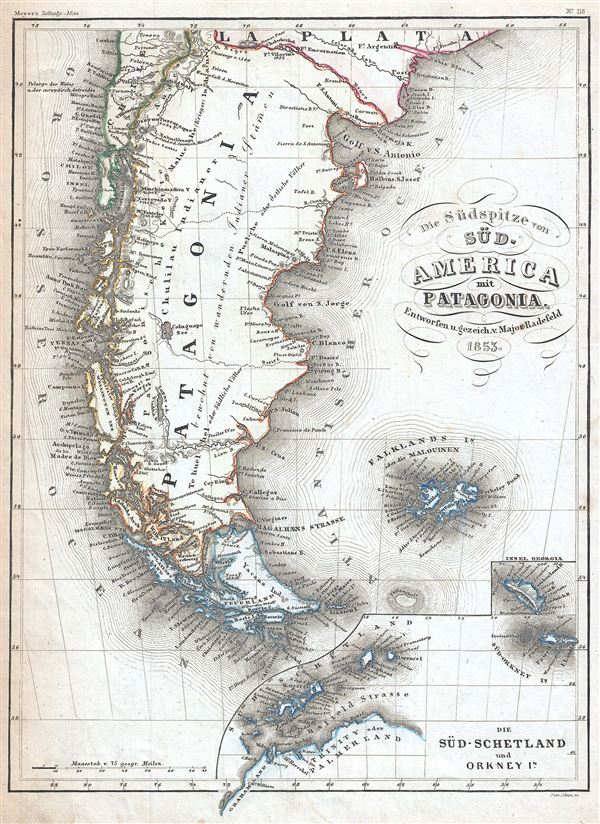 This is a fine 1853 map of Patagonia by Joseph Meyer. It includes Patagonia (part of modern day Argentina and Chile) as well as the Falkland Islands. An inset in the lower right quadrant features the South Orkney Island, the South Shetland Islands and the South Georgia Island. When this map was created, the region was largely unexplored. The map identifies speculative river courses, recently discovered lakes and other important topographical features along the coast. The map identifies the Falkland Islands - currently a British dependency. An inset in the lower right quadrant features the South Georgia Island - one of the most remote and southernmost islands on earth and the South Orkney Island. These Antarctic islands are rarely visited and were discovered by British seal hunters in 1821.

This map was issued as plate no. 116 in Meyer's Zeitung Atlas. Although all the maps in this atlas are not individually dated, the title page and maps were often updated while the imprint with the date was not, causing confusion to the exact date for some of the maps. Moreover some maps in the atlas were taped in at a later date as an update to the atlas. We have dated the maps in this collection to the best of our ability.