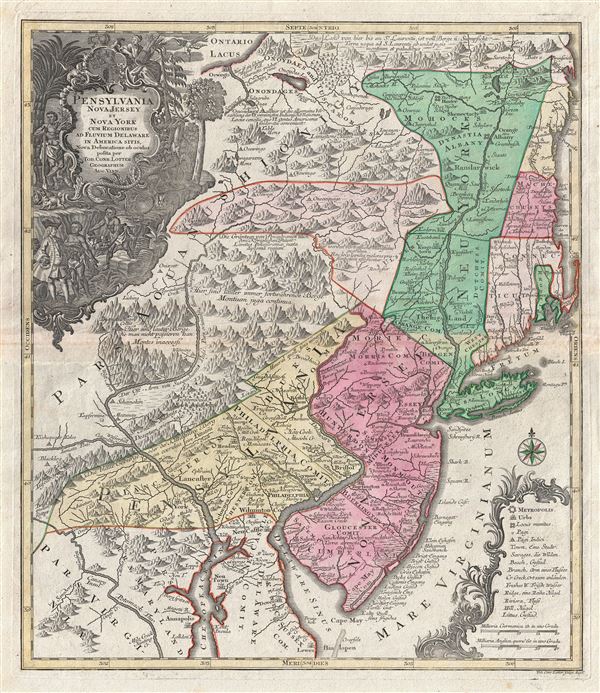 One of Lotter's most iconic maps.

A fine c. 1756 example of one of Tobias Conrad Lotter's most iconic maps. This is Lotter's important map of the Middle Atlantic and New England regions during the British colonial period. One of the most desirable, interesting and attractive pre-Revolutionary maps of the Middle English Colonies, particularly New York, New Jersey, and Pennsylvania. Lotter's map covers from Lake Ontario in the northwest eastward to the Atlantic and as far south as Maryland, Delaware and the Chesapeake Bay. Cartographically this map is heavily based upon the exceedingly rare 1849 map of the same region published by Lewis Evans. German immigration to Pennsylvania and New York was flourishing in the mid-18th century and consequently the demand in Germany for a good map of the region was high. Evans' map offered the perfect solution to this need and was almost immediately pirated as the, 'Special Land Charte von Pensilvanen...' by an unknown Frankfurt publisher. The Frankfurt map in turn was also almost immediately (in the same year) pirated by the prosperous firm of Mattias Seutter. Seutter's son-in-law, Tobias Conrad Lotter, was charged with the preparation and engraving of this map and it is his hand and style that we see here. The Seutter firm issued and reissued this map in several variants over the upcoming decade. In 1756 Lotter, following Suetter's death and his subsequent takeover of the firm, replaced Seutter's name on the map with his own. This is thus third state or 1756 edition. Although we've dated this to 1756, the fact is that it was not incorporated into an atlas until Lotter published his 1778Atlas Geographique so most catalogers have a difficult time dating this map with precision.

The original Evans map was intended as a map of the British colonies of New York, New Jersey, and Pennsylvania. Pennsylvania is shown bounded by the Appalachian Mountains in accordance with the land purchases William Penn made from the Iroquois League. New York is divided into three parts comprising of what is today New York and Vermont. Manhattan is shown attached to the mainland and Brooklyn appears as 'Brockland.'

On a more furtive level, Evans' maps was also a spy map of the Indian territories west of the Appellation Mountains. As the inhabited parts of Pennsylvania and New York slowly stretched westward into Indian lands, the governing bodies became increasingly aware of the need for accurate reconnaissance of the region. Evans was one of the first cartographers to penetrate and offer a reasonably accurate map of these areas. This map offers good reference to previously unmapped Indian villages, tribal regions, forts, and river ways.

The portions of Lotter's map that were drawn directly from the Evans map are therefore surprisingly accurate. In a departure from the Evans map, on the other hand, Lotter also decided to include within the boundaries of his map the coast of New England and the colonies of Rhode Island, Connecticut, and New Hampshire. These areas appear as if they were added as an afterthought and are consequently wildly, almost humorously, inaccurate. Indeed, it almost seems as if New England was molded to fit the map plate rather than the map made to fit New England. Boston and Cape Cod are drawn well within the boundaries of Connecticut. The western border of New Hampshire is entirely made of up the Atlantic seaboard. Rhode Island juts obscenely into Connecticut which itself in distended along the vertical. All four of the New England colonies shown are also miniaturized along the horizontal.

The decorative title cartouche in the upper left quadrant depicts William Penn surrounded by the flora and fauna of the region – turkey, deer, rabbit, etc., purchasing land from the indigenous American Indian tribes.

Many issues of this map have a very weak impression due to overuse of the original plate. This particular map on the other hand has a fine dark impression and is consequently an early run on the plate and a rare find.