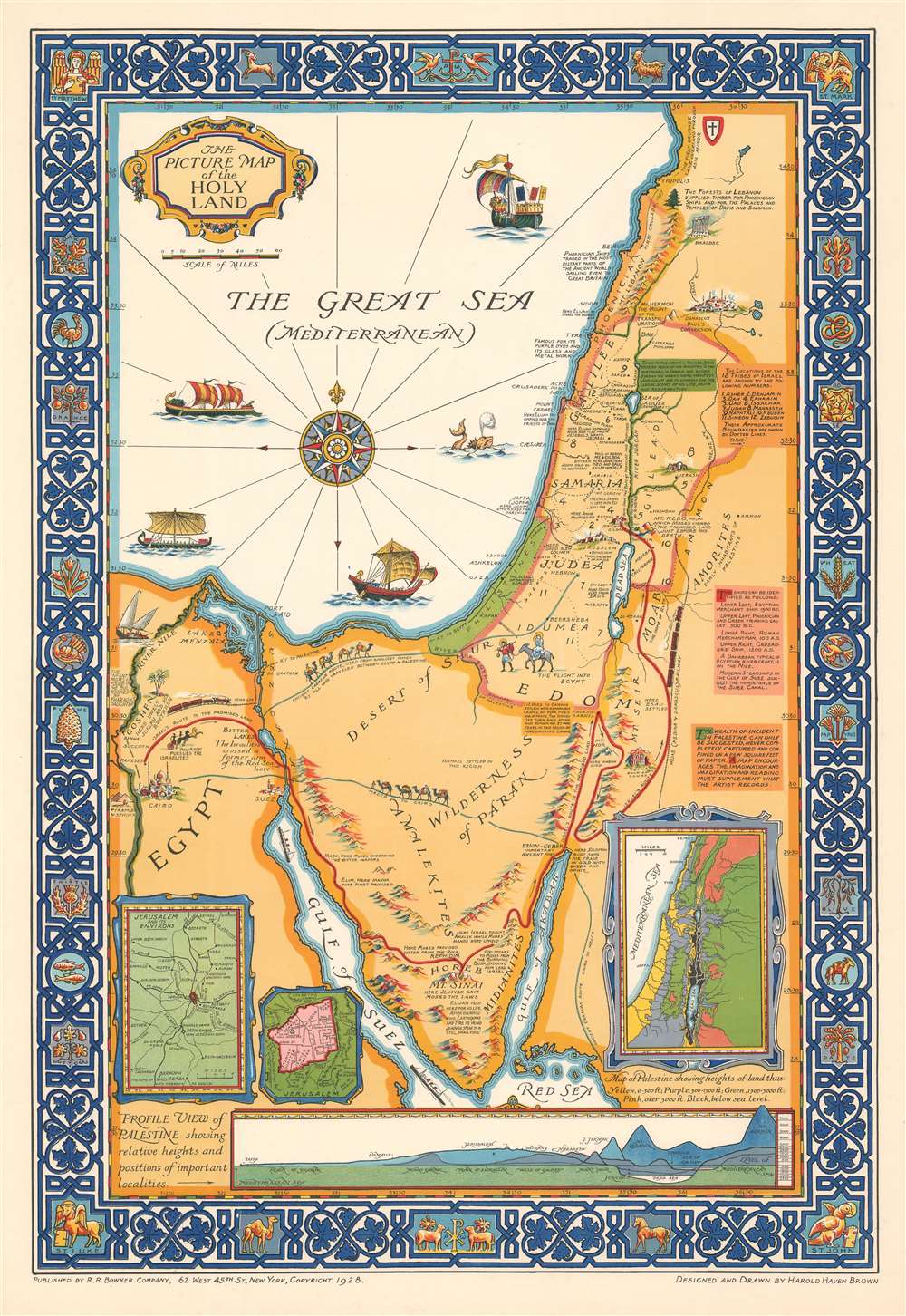 Highlights important Biblical and secular events throughout the region.

This is a 1928 Harold Haven Brown pictorial map of the Holy Land / Israel and/or Palestine, including the Sinai, and parts of Egypte, Syria, Jordan, and Lebanon. The map depicts the region from the Nile River to Ammon (Syria) and from Tripolis (Tripoli), Lebanon to the Red Sea.

Wonderfully illustrated, Brown relates key events from the Bible, including the site of where David slew Goliath, Jonah's point of embarkation at Jaffa, where John the Baptist preached and baptized, the site of Aaron's death, and the location where Esau settled. The Israelites' flight from Egypt and their subsequent wanderings is traced by a red line and important events that took place during the journey are noted. A green text box near the Sea of Galilee summarizes Jesus's life and work geographically, while yet another text box explains how the Twelve Tribes of Israel are referenced and that the dotted lines present on the map mark the boundaries between the lands of the tribes. A vignette near the Egyptian border depicts the flight of Joseph, Mary, and the infant Jesus fleeing to Egypt to escape the wrath of King Herod.

Not every reference included by Brown are strictly Biblical in nature. Cities and towns throughout the region are identified, with Jerusalem, Jericho, Damascus, Suez, and Cairo each meriting special attention with the inclusion of a small illustration to mark their location. A view of the pyramids and the sphinx is included near Cairo as well. Ancient caravan routes from Egypt to Palestine and from Mecca to Cairo are traced by blue lines and feature illustrations of caravans consisting of traders and their camels making the trek. Modern transportation routes are highlighted as well, with both the Medina and Damascus Railway, and the railroad between Egypt and Palestine illustrated. References are made to the prowess of ancient Phoenician sailors and traders and the renown of dyes, glass, and metal work from Tyre. A shield of the Knights Templar situated in the upper right corner visually invokes the First Crusade, which is noted to have traveled through the region from Asia Minor in 1097. In the same vicinity is a reference to the importance of Lebanese forests in the supply of timber to build Phoenician ships and the temples and palaces built by David and Solomon. A text box situated along the right border identifies the six different ships illustrated on the map, identifying them as Egyptian, Phoenician, Roman, a Crusader's ship, an Egyptian river boat, and a modern steamship meant to reference the Suez Canal.

Four insets are situated in the bottom third of the map. The first, along the right border, is a topographical map of Palestine highlighting the varied elevation of the region. The second and third, on the lower left, focus on Jerusalem. The smaller of the two is a plan of the Old City of Jerusalem and labels sites within its walls and just outside. The second, larger inset is a map of Jerusalem and its environs. The final inset is a profile view of Palestine providing the viewer with an understanding of the differences in terrain found in the region, from the Dead Sea, which is below sea level, to Mt. Hermon, rising to well above 7000 feet. The whole is surrounded by a decorative border featuring 'tile' bearing illustrations of important crops and vegetation and the symbols of St. Matthew, St. Mark, St. Luke, and St. John.

This map was created and drawn by Harold Haven Brown and published by the R.R. Bowker Company in 1928. Only one example is recorded in the OCLC and is part of the David Rumsey Map Collection at Stanford University.

Harold Haven Brown (June 6, 1869 - April 7, 1932) was an American artist, cartographer, illustrator, teacher, painter, and museum director. Born in Malden, Massachusetts, Brown attended the Massachusetts Normal Art School before heading to Paris, France to study with Jean Leon Gérôme at the École des Beaux-Arts and with J.P. Laurens at the Académie Julian. Brown also spent significant amounts of time studying museum work at the Louvre, the Musée de Cluny, and the Musée du Luxembourg. He married Florence Bradshaw, a fellow artist, on November 4, 1897. The couple lived in Chicago and then Indianapolis, where Brown served as the director of the John Heron Institute, holding the position from 1913 until 1921. They then moved to Provincetown, Massachusetts in 1923. Brown was a noted mapmaker, and also created woodcuts and watercolors. He also wrote books and articles on calligraphy and on decorative, pictorial, and mechanical drawing. He and Florence played an important role in the founding of the Provincetown Art Association and Museum and Brown served as its president from 1926 until his death in 1932. He and Florence had two children. Learn More...


The R.R. Bowker Company (1868 - present) is an American company currently based in New Providence, New Jersey that provides bibliographic information on published works to the books trade, including publishers, libraries, booksellers, and individuals. Bowker is also the exclusive U.S. agent for issuing International Standard Book Numbers (ISBNs). The company was founded in 1868 in New York City by Frederick Leypoldt, a bookseller, to provide and compile bibliographic information with the goal of making the book business more efficient. He established the Literary Bulletin, his first periodical, that year and in 1870 issued the first edition of his Annual American Catalogue, the forerunner of Books in Print. The first issue of Publisher's Weekly was published in 1872, with the first issue of Publishers' Uniform Trade-List Annual appearing in 1873, and followed by the first issue of Library Journal in 1876. The company was acquired by Richard Rogers Bowker in 1878. The pair then founded two influential book-industry references: Literary Marketplace and Ulrich's Periodicals Directory. The R.R. Bowker company was acquired by the Xerox Corporation in 1967, which then sold it to Reed International in 1985. Also in 1985, Publisher's Weekly was transferred to the Cahners Publishing Company after 113 years as part of the R.R. Bowker Company. The Cambridge Information Group bought Bowker in 2001, and sold Literary Marketplace in 2007. After the Cambridge Information Group acquired ProQuest Information and Learning, R.R. Bowker was position as an affiliate of ProQuest. Learn More...