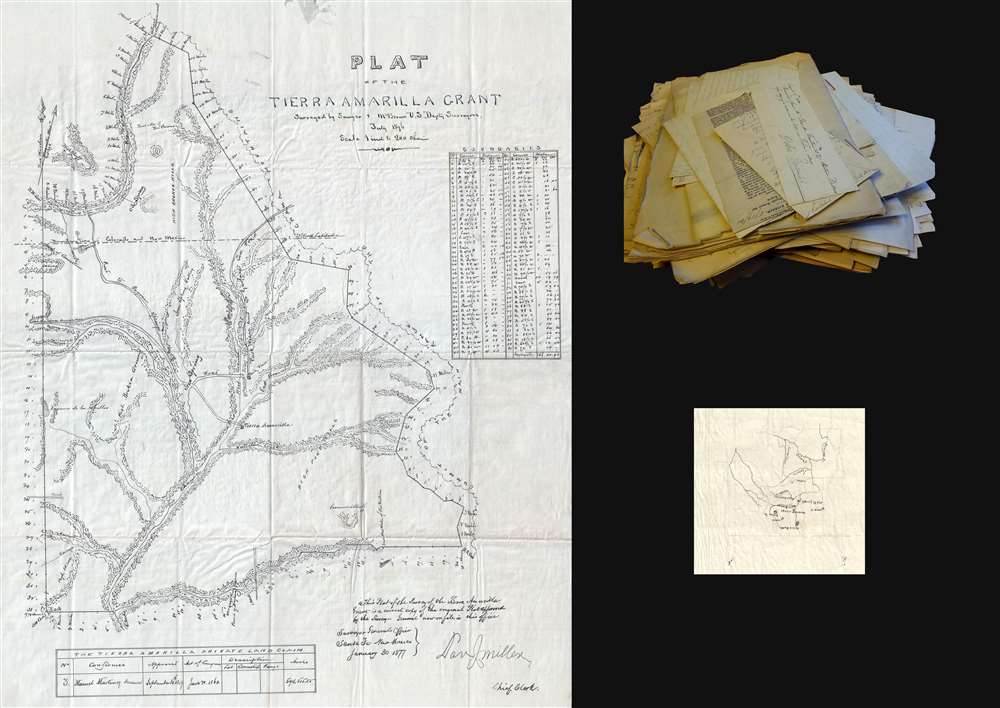 This is an 1877 manuscript map of the Tierra Amarilla Grant in northern New Mexico and southern Colorado. The map depicts the entirety of the grant, from the Navajo River as its northern border to the Nutrias River in the south and from the Laguna de los Caballos in the west to the Chama Mountains in the east.

The Contentious History of the Tierra Amarilla Grant

A Mexican citizen named Manuel Martinez petitioned the Governor of New Mexico on April 23, 1832, seeking to be granted a tract of land call Tierra Amarilla. Situated on the Chama River, Martinez sought the land for agricultural and ranching purposes on behalf of himself, his eight sons, and all others who may accompany him. After a dispute between Martinez and the town council of Abiquiu, the closest town to the proposed grant, the Provincial Deputation granted the land to Martinez, although the Alcalde of the Town of Abiquiu failed to deliver possession of the grant (the paperwork) to Martinez because they feared attacks from the local Native Americans.

History Pertaining to the Grant

In 1856, following the annexation of the territory that now makes up New Mexico and Colorado into the United States, Francisco Martinez, one of Manuel Martinez's heirs, filed a petition with the Surveyor General's office seeking confirmation of the Tierra Amarilla Grant. Surveyor General William Pelham investigated Martinez's claim and in a September 25, 1856 decision stated that his office was satisfied that

the Provincial Deputation had authority under the laws of Mexico to make donations of land to individuals, that the title papers evidencing the grant had been proven to be genuine, and that the Failure of the Alcalde of the Town of Abiquiu to deliver possession to Martinez did not invalidate the grant since such a failure had been satisfactorily explained

and recommended its confirmation by Congress. The grant was confirmed as Private Land Claim No. 3 by an act of Congress approved June 21, 1860.

John M. Isaacs, one of the owners of the grant at the time, submitted a request to the Surveyor General on June 30, 1875 that the grant be surveyed in order that a patent might be issued. After another legal battle, the grant was surveyed by Deputy Surveyors Sawyer and McBroom in July 1876. The survey concluded that 594,515.55 acres were contained within the grant and that part of said grant lay within the State of Colorado. On February 21, 1881, the grant was patented to Francisco Martinez.

A Closer Look at the Plat of the Tierra Amarilla Grant

This map is a manuscript copy of the original survey conducted by Sawyer and McBroom in 1876. Highly detailed, rivers and creeks throughout the grant are illustrated, along with mountains and hills. The town of Tierra Amarilla is labeled. Each mile is marked out on all sides of the grant and the Colorado-New Mexico border is noted. A table of boundaries is included along the right border. A note in the bottom right corner reads, 'This Plat of the Survey of the Tierra Amarilla Grant is a correct copy of the original Plat approved by the Survey General now on file in this office.'

The Archive of Charles de Foresta

The Plat of the Tierra Amarilla Grant is accompanied by an archive of documents that once belonged to Charles (Chas.) de Foresta. De Foresta was born Marie Euphrasius Maffée Charles de Foresta on February 5, 1836, into a noble French family. He married Marie Chornton Parks of Bury, England on December 19, 1867, in Paris. Less than a year later Charles, now Chas., de Foresta arrived in the United States on September 8, 1868, on board the Tarifa from Liverpool. Most of the letters in the archive date from 1879 and 1880, when de Foresta was living in Alamosa and Trinidad in Colorado. De Foresta registered in the 1880 census and gave his occupation as engineer. Between this, and news clippings concerning the San Juan Extension of the Denver and Rio Grande Western Railroad, we can speculate that de Foresta worked for the railroad in some manner or another, but we have been unable to find any definitive proof of that assertion. A second, much smaller, manuscript map of northern New Mexico is included in the archive as well, along with a smattering of official documents (some of which are from the French consulate in Chicago) and purchase receipts.

It appears that the original survey resides in the collection of the Denver Public Library and we are aware of no other examples. This map was created in the office of the Surveyor General in Santa Fe, New Mexico on January 30, 1877.

Very good. Manuscript on wax paper. Accompanied by second manuscript map and archive of letters and other documents.