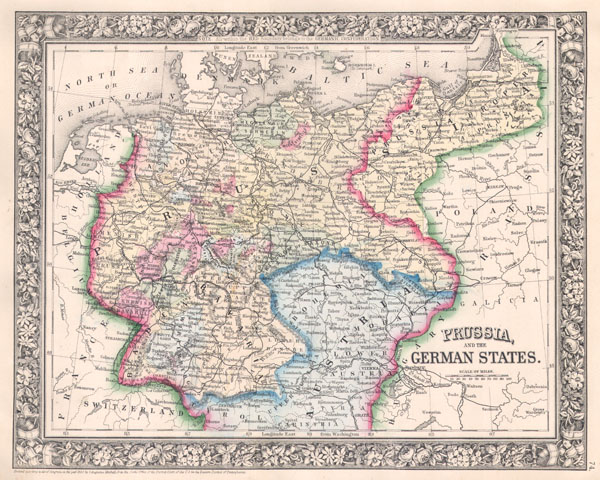 A beautiful example of S. A. Mitchell Jr.'s 1864 map of Prussia and Germany. Depicts the German states from the border with Holland and Belgium eastward as far as Poland and Russia. Extends south into Austria and Bohemia (the modern day Czech Republic). Defines the 'Germany' along the lines established by the German Confederation in 1850 – extending south into Austria. At this time tensions were high between the dominant states of Prussia in the north and Austria in the south. Just two years after this map was issued the Confederation dissolved into the chaos of the Austro-Prussia War which ultimately divided the Confederation into the Northern German Confederation and a number of southern Germanic states roughly aligned with the Austrian Empire. Denotes both political and geographical details. One of the most attractive American atlas maps of this region to appear in the mid 19th century. Features the floral border typical of Mitchell maps from the 1860-65 period. Prepared by S. A. Mitchell for inclusion as plate no. 74 in the 1864 issue of Mitchell's New General Atlas. Dated and copyrighted, 'Entered according to Act of Congress in the Year 1860 by S. A. Mitchell Jr. in the Clerk's Office of the District Court of the U.S. for the Eastern District of Pennsylvania.'