1866 Johnson Map of Germany and Prussia 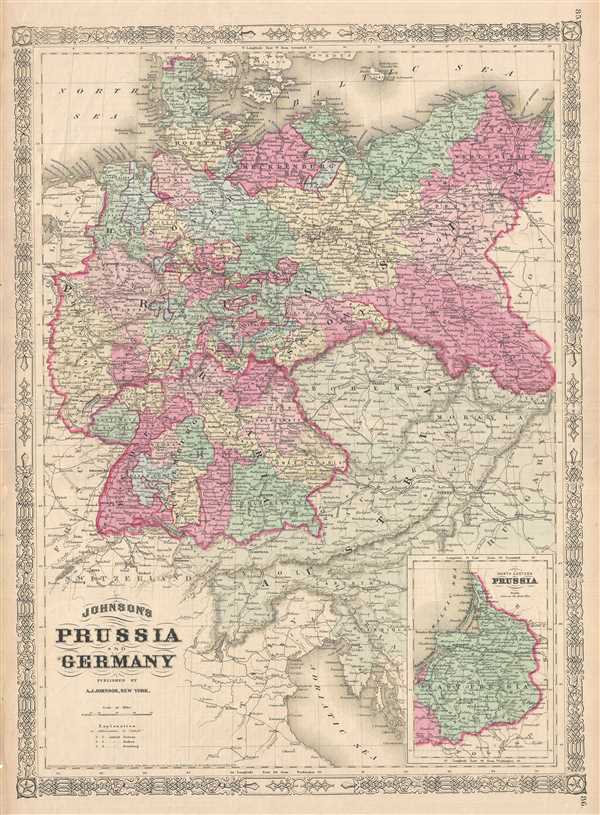 1866 Johnson Map of Germany and Prussia

Johnson's most sophisticated rendition of Germany and the North German Confederation.

This is A. J. Johnson and Ward's 1866 map of Prussia and Germany. Covers the region in considerable detail with color coding according to districts. Also includes much of Austria. An inset in the lower left quadrant details northeastern Prussia or Konigsberg. Depicting the large and awkward region of the German Confederation has always been a challenge for Johnson. Earlier atlases divided Germany into as many as three or four different maps. This, Johnson's most sophisticated rendition of Germany, follows the creation of the North German Federation (Norddeutscher Bund) at the end of the Austro-Prussian War.

Features the fretwork border common to Johnson's atlas work from 1864 to 1869. Steel plate engraving prepared by A. J. Johnson for publication as page nos. 85-86 in the 1866 edition of his New Illustrated Atlas…. Dated and copyrighted, 'Entered according to Act of Congress in the Year of 1866, by A. J. Johnson in the Clerks Office of the District Court of the United States for the Southern District of New York.'

Very good. Some wear and toning along original centerfold. Minor spotting.
Looking for a high-resolution scan of this?