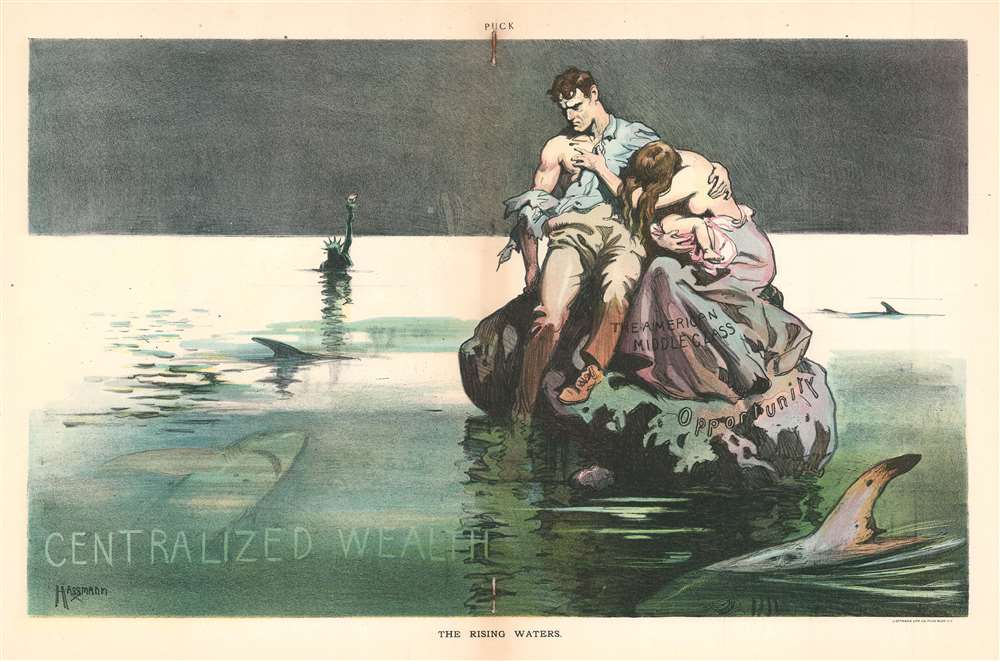 Is centralized wealth a threat to the middle class?
$350.00

This is a 1906 Carl Hassmann political cartoon lamenting the inequalities in American society and decrying the plight of middle- and lower-class Americans and the ever-increasing threat posed by centralized wealth to these classes. A cartoon that could easily be printed today, Hassmann depicts the Middle Class as a man, woman, and infant dressed in torn clothing and stranded on a rock labeled 'Opportunity.' 'Opportunity' is surrounded by continually rising, shark-infested waters, labeled simply as 'Centralized Wealth.' The Statue of Liberty appears in the background, with the water up to her shoulders. Even in 1906, Americans were concerned about the amount of wealth held by the elite and the distance between the haves and the have-nots. An unregulated economy and corporate abuses (at least the second part of that sounds very familiar) caused Americans to worry about their future and the threats that concentrated wealth posed to the average American and to liberty itself.

This cartoon was drawn by Carl Hassmann and published in the June 6, 1906, issue of Puck. An example is part of the collection at the Library of Congress. This piece does not appear in OCLC.

Hassmann, C. 'The Rising Waters,' Puck, Vol. LIX, No. 1527. (Puck: New York) June 6, 1906.     Puck (1871 - 1918) was the first successful humor magazine in the United States and featured colorful cartoons, caricatures, and political satire. Founded by Joseph Keppler in St. Louis, Puck began publishing both an English and a German language edition in March 1871. The German edition moved to New York City five years later and published its first issue there on September 27, 1876, and the English edition soon followed and began publishing from New York on March 14, 1877. 'Puckish' means 'childishly mischievous'm which led to Shakespeare's Puck (from A Midsummer Night's Dream) to be recreated as the mascot of the magazine and for his name to become its title. Each issue featured a full-color political cartoon on the front cover, a full-color non-political cartoon on the back cover, and a two-page centerfold that usually addressed a political topic as well. In 1893, Keppler moved the magazine to Chicago and published smaller editions of Puck from the Chicago World's Fair. Keppler died in 1893, and Henry Cutler Bunner, who had been editor since 1877, took over. Bunner operated the magazine until he passed away in 1896, which left Harry Leon Wilson in charge until his resignation in 1902. The German edition was published until 1897. Joseph Keppler, Jr. then became editor. William Randolph Hearst bought the magazine in 1916 and operated it for another two years until the final issue was distributed on September 5, 1918.

Library of Congress AP101.P7 1906.
Looking for a high-resolution scan of this?