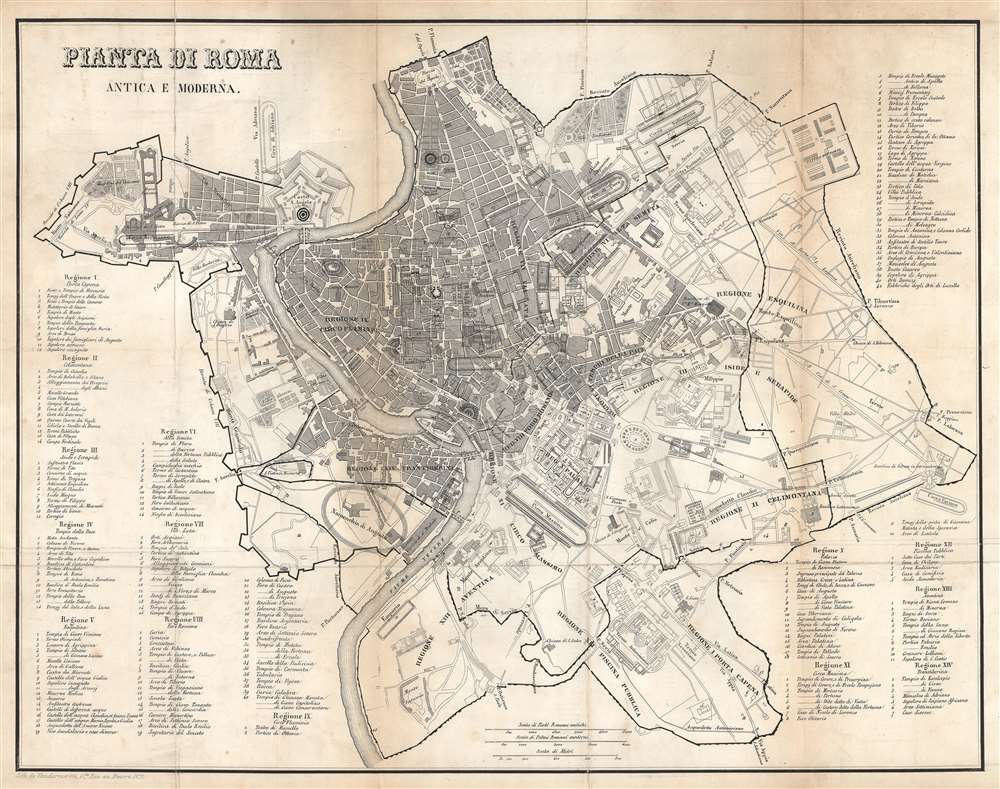 An early edition of a very rare map of Rome, Italy, highlighting both ancient and contemporary construction.
$500.00

This is an 1823 Vandermeren city map or plan of Rome, Italy. The map depicts the city from the Tiber River to the Circus Varianus and from the Piazza del Popolo to the Porta San Sebastiano, a gate along the Appian Way in the Aurelian Walls surrounding the city. Vatican City is also illustrated and is situated on the upper left near the Castel Sant'Angelo. Myriad locations throughout the city are labeled, including the Baths of Caracalla (labeled here as Terme Antoniniane), the Circus Maximus, and the Piazza di Spagna. Over 230 other sites, both ancient and modern, are numerically identified and correspond to fourteen different lists situated around the map itself. As the map is divided into fourteen different regions, these lists range from five sites to over forty. Numerous streets are identified, including the famous Appian Way (Via Appia).

This map was published to accompany Joseph Gaume's (1802 - 1879) Les trois Rome. Journal d'un voyage en Italie. It is not clear if this map accompanied all editions of the book. Examples of the separate issue map are extremely scarce. We are unaware of any other examples of Vandermeren's edition of this map, but we have seen an 1847 edition published by P. Bineteau in the collection of the Bibliothèque Nationale de France and we previously possessed an 1852 edition that was published by Joseph Manz.

Vandermeren (fl. c. 1838 - 1851) was a Belgian lithographer based in Brussels. His maintained offices at no. 1 Grande Rue au Beurre (today just Rue de Buerre). We have been unable to find any further trade of Vandermeren the printer, but the Almanach Royal et du Commerce de Belgique for 1838, and the Almanach du Commerce et de L'Industrie Belgium of 1851, both identify a Vandermeren at this address working as a lingerie seller and laundress. It is unclear how printing is related. Learn More...