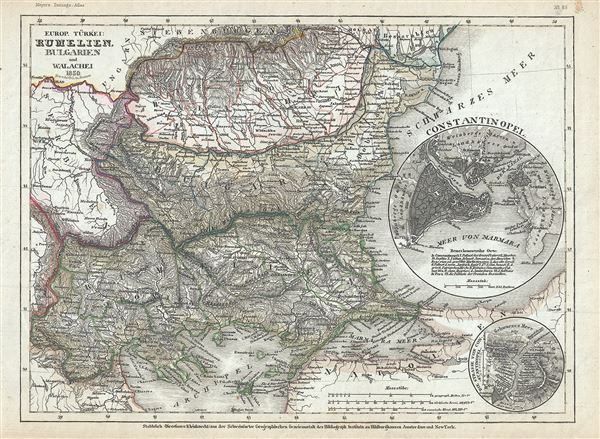 This is a scarce 1850 Joseph Meyer map of the Balkan region in Europe. This map, made when the Ottoman Empire controlled much of the region, covers the modern day nations of Romania, Bulgaria, Macedonia, Greece and Turkey. Throughout, major towns, cities, rivers, mountains and other topographical features are noted. Two insets in the lower right quadrant features the Bosporus Strait and Constantinople.

This map depicts the waning years of Ottoman hegemony in the region, with the Greek Independence movement achieving Peloponnesian sovereignty in 1821. The Ionian Republic, under the protection of Great Britain, was also free of Ottoman control. The other Grecian and Balkan states, including Serbia, Croatia, Moldavia, Wallachia, Albania, and Macedonia, remained at least nominally under Ottoman control until 1878.