1853 Mitchell Map of Russia in Asia and Tartary 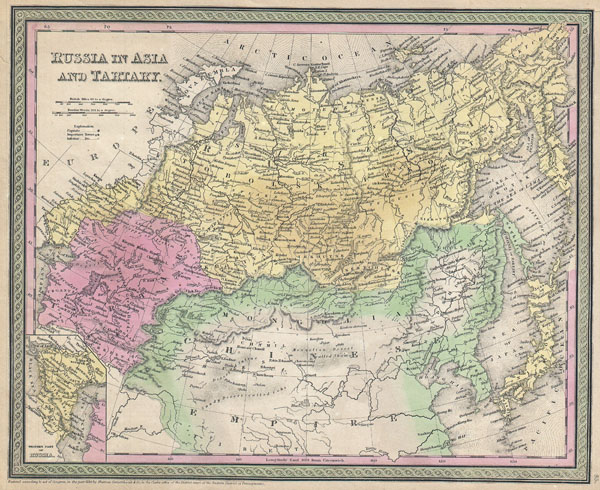 1853 Mitchell Map of Russia in Asia and Tartary

An extremely attractive example of S. A. Mitchell Sr.'s 1853 map of Russia in Asia. Extends from the Ural Mountains and the Caspian Sea eastward as far as Siberia, Kamtschatka and Japan. Extends south to include Korea, Mongolia, and much of northern China. An inset map in the lower left quadrant details the region between the Black Sea and the Caspian Sea, or as it is generally known, the Caucuses. Surrounded by the green border common to Mitchell maps from the 1850s. Prepared by S. A. Mitchell for issued as plate no. 65 in the 1853 edition of his New Universal Atlas. Dated and copyrighted, 'Entered according to act of Congress, in the year 1850, by Thomas Cowperthwait & Co., in the Clerks office of the District court of the Eastern District of Pennsylvania.'