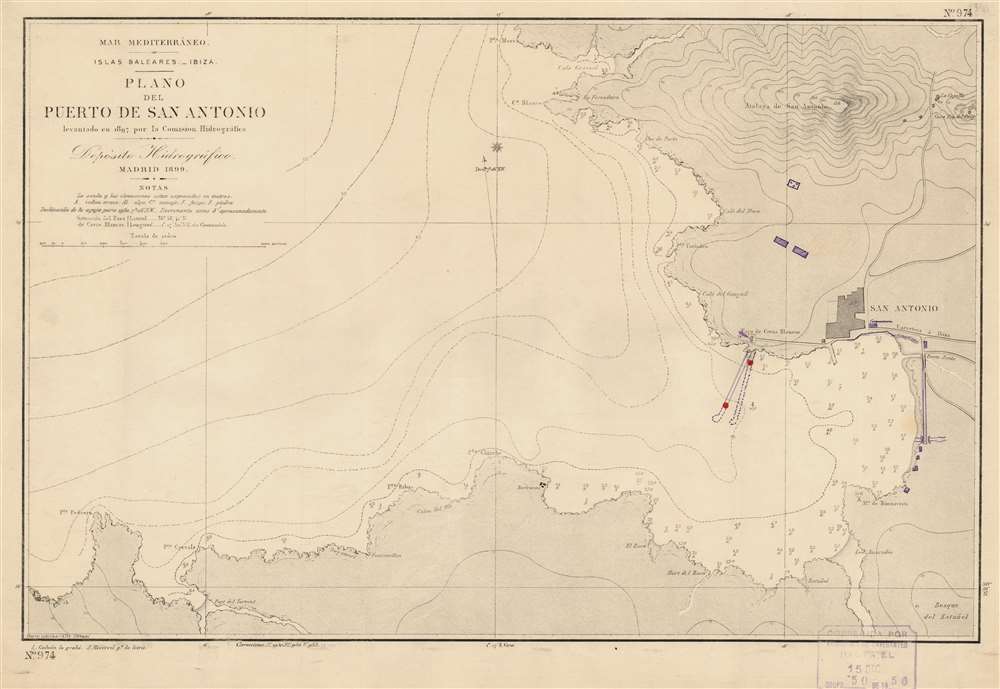 Considered by British clubbers to be the clubbing capital of the world.
$175.00

This is a 1956 Depósito Hidrográfico nautical chart or maritime map of San Antonio Port on Ibiza in the Balearic Islands. Today known as Sant Antoni de Portmany, the city of San Antonio is situated along the map's right side, offering mariners an unobstructed depiction of the port's approaches. Depth soundings in meters occupy the innermost parts of the bay. Lines across the bay, and the Balearic Sea mark off ten-meter increments of open ocean. A handful of locations are noted in the region, including a house and group of huts. Manuscript notations indicate a pier that moved slightly to the west since one is marked by dashed lines and the other by solid lines. Other manuscript additions illustrate buildings and the extension of a road. The cemetery has also been crossed out in manuscript.

The Clubbing Capital of the World

Before the influx of hotels and tourists in the mid-1950s, San Antonio was a small fishing village on the west coast of Ibiza. Today, it is recognized by British clubbers as the clubbing capital of the world.

This chart was first published in 1899 by Depósito Hidrográfico. Three subsequent printed editions with corrections were published, with the last appearing in 1953. The present example dates from the 1953 printing, but a stamp in the lower right corner dates the manuscript additions to December 15, 1956. An example of the 1899 edition is cataloged in OCLC and is part of the collection at the Biblioteca Nacional de España.