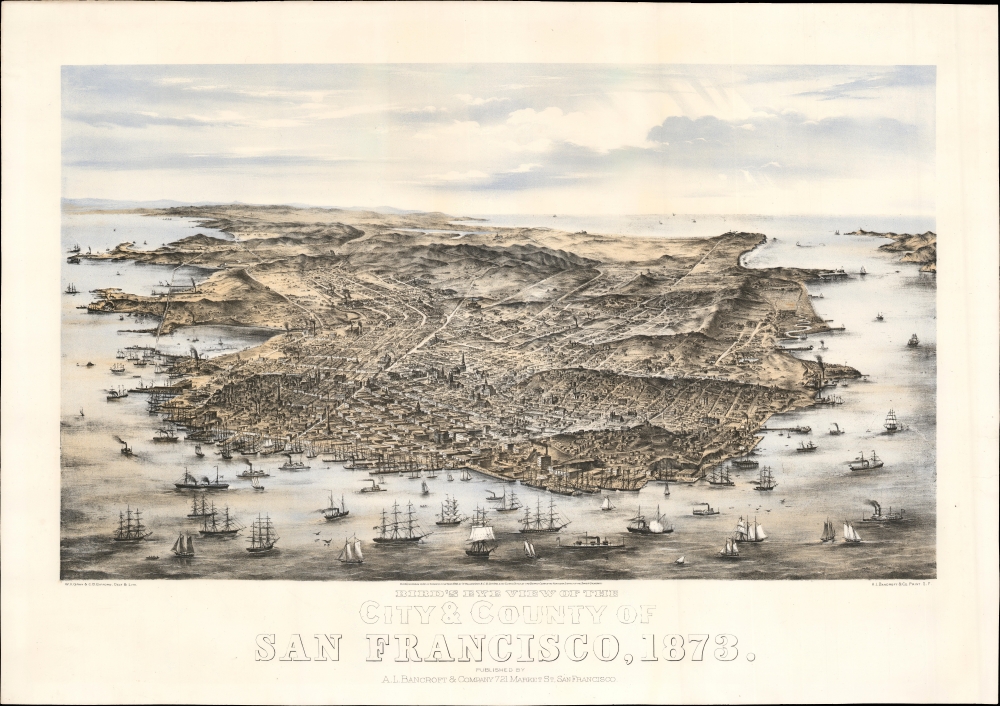 One of the most significant and desirable views of San Francisco ever published.
$19,500.00

An extraordinary Charles Braddock Gifford and William Vallance Gray 3-color chromolithograph bird's-eye view of San Francisco, California, in 1873 - one of the most desirable and influential views of San Francisco ever produced. The view looks southwest on San Francisco Peninsula from a fictional highpoint to the northeast. The city and bustling harbor are prominent in the foreground while the peninsula's hills and lakes are in the background. Golden Gate appears at the upper right, and Telegraph Hill at bottom center.

This rare view is based upon a painting by Charles B. Gifford. It was first copyrighted and published in 1868. Although the copyright was not updated, the title was updated for subsequent states issued in 1869, 1872, and 1873. It was published by Albert Little Bancroft (1841 – 1914), of the significant Bancroft Company. The map historian John Williams Reps's cataloging of this map is confusing due to multiple views of the same title, but related publishers. He identifies 5 states, two published in 1868, and subsequent editions in 1869, 1872, and 1873 (this example). While there are about 7 examples, in various editions, held in institutional collections, we have not identified another example in the market since 1922. Rare opportunity.


William Vallance Gray (September 5, 1839 - October 15, 1891) was a Scottish-American artist, engraver, and lithographer active in San Francisco during the second half of the 19th century. Gray was born in Glasgow, Scotland. He emigrated to the United States sometime around 1860, settling in San Francisco. Gray was naturalized as a U.S. Citizen on October 16, 1868. By 1868 he had partnered in the lithography form of Charles B. Gifford. Gray became prominent for his paintings and views of the American west. He was a member of several fraternal orders, including the Odd Fellows, the Masons, and the Scottish Thistle Club. He is buried in the San Francisco Masonic Cemetery. Learn More...


Bancroft Company (1852 – present) was a San Francisco, California, based publishing firm active in the second half of the 19th century. Bancroft is considered the first major publisher to develop in California. The firm was founded in 1852 when Herbert Howe Bancroft (1832 – 1918) relocated from Buffalo, New York, to San Francisco, California, with a stock of books to establish a regional office of his family's East Coast publishing house. The firm, initially situated in the Naglee Buildings and Montgomery and Merchant Streets, was immensely successful both as booksellers and publishers. H. H. Bancroft resigned from the company in 1868 to pursue historical study and passed on management to his brother, Albert Little Bancroft (1841 – 1914). A. L. Bancroft ran the firm from 1869 and 1871. It was Albert who published the firm's first maps, including general maps of California, pocket maps of San Francisco, and other southwest focused material. Albert led the firm during its most expansive period, was a pillar of the San Francisco community, and a founding member of the Bohemian Club. The firm was exceptionally clever in leveraging California's gold wealth to maximize its profitability. According to A. L. Bancroft,

Reps, John, Views and Viewmakers of Urban America (University of Missouri, Columbia, 1984), 321.
Looking for a high-resolution scan of this?