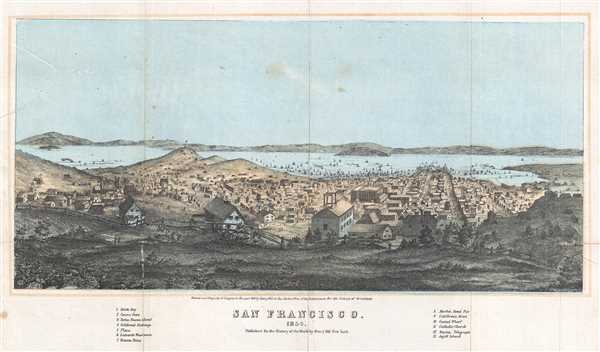 A highly appealing view map of San Francisco dating to 1854. Reveals San Francisco as seen from Nob Hill looking down California Street. Telegraph Hill appears on the left. Shows numerous buildings and ships throughout. The most important buildings and locations are identified numerically. These include North Bay, Contra Costa, Yerba Buena Island, the California Exchange, the Plaza, Leanard's Warehouse, Ricon Point, the Market Street Pier, California Street, Central Warf, the Catholic Church, the Marine Telegraph, and Anjill Island. Published by Henry Bill for inclusion in the 1854 edition of his History of the World. There are seven different printings of this view, the earliest appearing in 1850 with subsequent editions in 1851, 1852, 1854, 1855, 1856, and 1857. Only the 1851 version appears to be from a different plate.