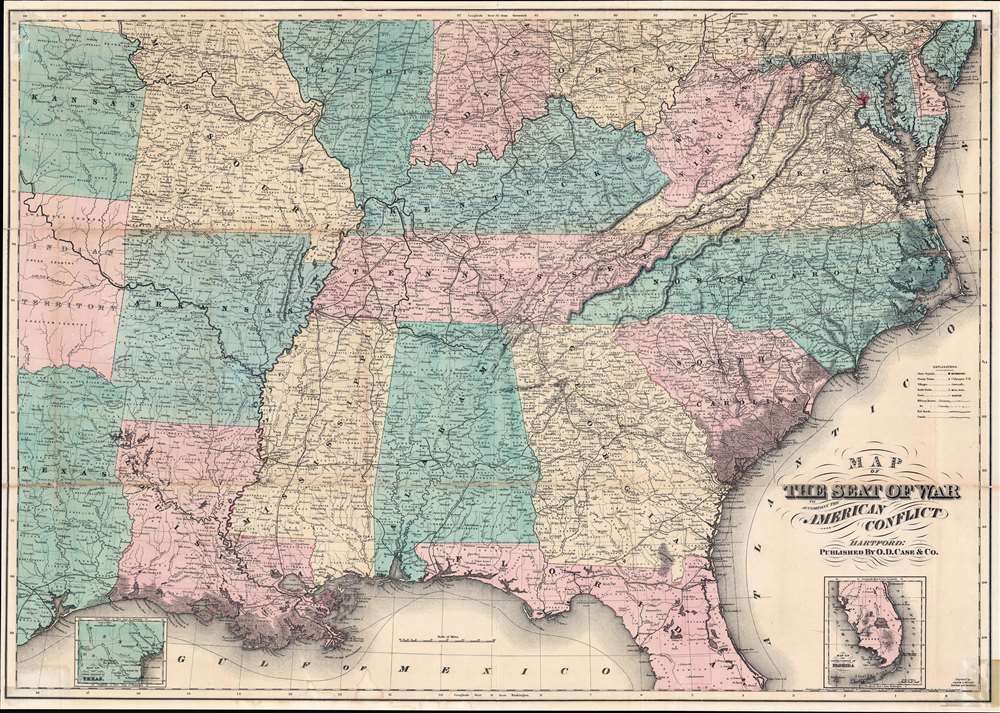 One of the largest obtainable maps of the Confederacy.
$750.00

This is an 1866 Orlando D. Case and Company map of the southeastern United States. The map depicts the southern United States from the Mason-Dixon Line south to the Gulf of Mexico and from Kansas, Oklahoma (Indian Territory), and Texas to the Atlantic Ocean. This important map was published one year after the end of the Civil War in Horace Greeley's book The American Conflict. An important work about the war from the Unionist perspective, this map visualizes the information it provides. Highly detailed, state capitals, large cities, and towns are labeled throughout, from Ohio to Florida, with Washington, D.C. shaded in red. Civil War battle sites are labeled, along with railroads and rivers, key components to the war for both the Union and the Confederacy. The topography along the coast from South Carolina to Virginia, which played an important role in the war, is illustrated. Two inset maps are present: one, in the lower right, illustrates the lower portion of Florida, the other, in the lower left, depicts the lower portion of Texas.

This map was engraved by Oliver J. Stuart and published by O. D. Case and Company. An example is part of the David Rumsey Map Collection and it is well represented institutionally despite being scarce to the market.

Orlando Dwight Case (August 17, 1826 - January 21, 1903) was an American inventor and book publisher. Born in Sandisfield, Massachusetts, Case's father was a farmer and he grew up on the family homestead in West Simsbury, then known as Canton. He helped his father and brothers work the farm, but realized as he grew up that he did not possess the constitution to succeed as a farmer. He spent his time not working in the farm canvassing for books and teaching in the district school, where the conflict between 'whether the big boys or the teacher should run the school' reigned. Case lost two brothers, his only sister, and his mother to tuberculosis over an eight year period. Case moved to Hartford in 1849 and sent into business with H. H. Hawley and Company, a book and map publisher. The following year, Case formed a partnership with his uncle Newton Case and formed O. D. Case and Company in Hartford. The business operated for the next fifty-two years and mostly published subscription books and wall maps for schools. One of their most popular books, The American Conflict by Horace Greeley, would have sold even more copies had Greeley not sighed Jefferson Davis's bail bond and dissatisfied so many of the subscribers. Case became the eastern agent for a Chicago-based school furniture factory in 1875, and several years later he opened his own school furniture factory in Sandisfield, which operated for twenty-two years. At this point he began working his way out of of the publishing trade. Case married Marry L. McDonnell of New York City in 1859, with whom he had four children. Case died of a heart attack in his office on January 21, 1903. Learn More...


Oliver J. Stuart (1826 - c. 1890) was an American engraver based in New York and Brooklyn in the middle part of the 19th century. He registered for the draft in New York in 1863, at the time 39 years old. He has a moderate corpus of work, but little is known of his life. Stuart remained active until the 1880s. Learn More...

Greeley, H., The American Conflict: A History of the Great Rebellion in the United States of America, (Hartford: O. D. Chase) 1866.