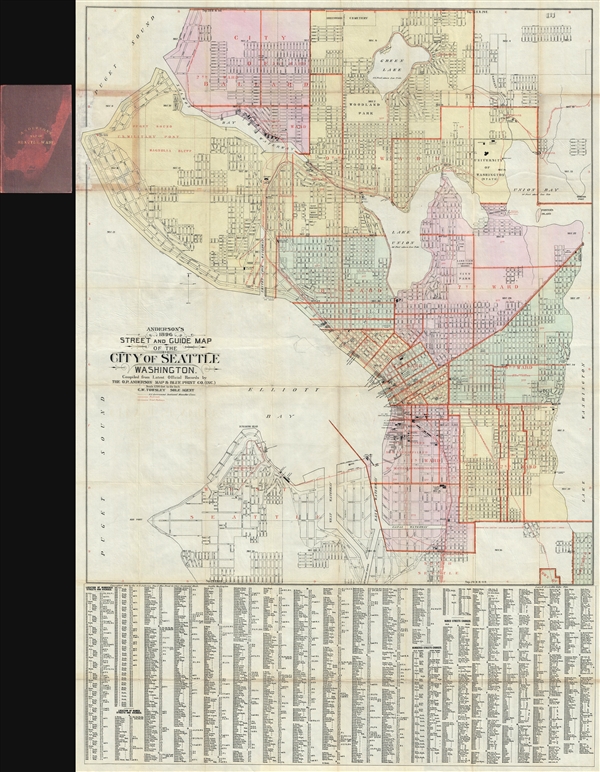 Published just 45 years after the Seattle's founding, at the height of the Yukon Gold Rush, this is one of the earliest separately issued maps of the city to be published in that city.

Published just 45 years after the Seattle's founding, at the height of the Yukon Gold Rush, this is one of the earliest separately issued maps of the city to be published in that city. This is a rare and impressive large format 1896 city plan or map of Seattle, Washington, by O. P. Anderson (Oliver Phelps). Probably Anderson's most ambitious cartographic endeavor, this map covers from, roughly, Green Lake to the Duwamish Waterway (Duwamish River) and from the Puget Sound to Lake Washington. The scale is impressive with important buildings, streets, new developments, parks, and bridges noted. The University of Washington is noted. The map has been overprinted in red to indicate block numbers, development plans, railroads, city wards, and land fills.

Cartographically this map follows several earlier plans of Seattle also issued by Anderson. Anderson's first map appeared in 1889 Map of the City of Seattle, also issued in 1890. He then issued the more common Anderson's New Guide Map of the City of Seattle. Both of these maps were published in smaller formats and covered a roughly twice the area, making the present map Anderson's most ambitiously detailed production. The present map was printed by Christopher Towsley. Considering that the city of Seattle was founded just 45 year earlier, the level of development is remarkable – a clear indication of Seattle's population boom in reaction to the Klondike Gold Rush.

While all early maps of Seattle are rare, this map is of note. The Streeter Sale included 7 of Anderson's maps (3295, 3319, 3401, 3544, 3545, 3581 and 3952), but this map was not part of the offering. The OCLC notes only four institutional examples located at the University of Washington, Yale, the Huntington Library, and the University of California Davis. We are aware of one other example in private hands.

Oliver Phelps Anderson (c. 1859 – 1950) was a Seattle based photographer, draughtsman, businessman, and cartographer active from the latter part of the 19th century into the early 20th century. Our earliest records, dating to the early 1880s, identify him as a bookkeeper. Anderson was married to novelist Ada Woodruff Anderson of San Francisco on June 4 of 1882. By the late 1880s Anderson had started his own business as a draughtsman. He opened a civil engineering and map publishing business, O. P. Anderson and Company around 1890. In addition to his work as a draughtsman and mapmaker, Anderson was a lifelong hobbyist photographer. As a hobbyist photographer and professional draughtsman Anderson was experienced with early cyanotype processes and quickly realized their potential for cartography. He released many of his maps in blueprint to facilitate rapid annotation and corrections before sending them to out for printing. Anderson's use of cyanotype photography to produce prototypes of his maps is, as far as we know, unique. Most of his map focus on the Seattle area, and King County, but some few also detail Alaska and the Yukon Gold Fields. Embracing his hobby, he opened a photography supply house, the Anderson Supply Company, located at 111 Cherry Street, Seattle, around 1900. Around 1913, Anderson’s son Maurice P. Anderson took over as president of the company, and Anderson acted as secretary-manager, a position he continued to hold until around 1940, probably until his death. Anderson Supply Co. continued to do business, with Maurice Anderson as president, until the late 1950s. Anderson's surviving hobbyist photographs are an important records of Seattle's development correspondent during its most meteoric period of growth in the late 19th century. Today many of Anderson's photographs are archived at the Sophie Frye Bass Library. Learn More...


Christopher W. Towsley (fl. c. 1880 – c. 1914) was a Seattle based printer and businessman active in the latter part of the 19th century. Towsley produced maps for government and civil engineering use and partnered with Oliver Phelps Anderson to issue commercial maps of Seattle and King County. He is also registered as a principal of the Pioneer Rent & Collection Company, a real estate concern. Learn More...

Very good. Backed on archival tissue. Some wear and toning along original fold lines. Slight loss at some fold intersections. Separated from by accompanied by original gilt stamped linen binder.